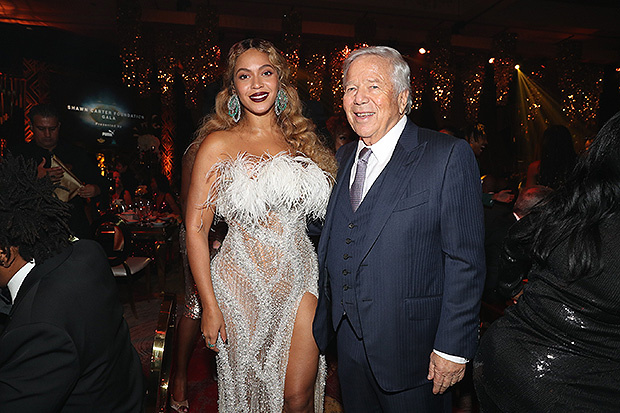 Beyonce, 38, is heating things up down south! The “Single Ladies” songstress attended night two of The Shawn Carter Foundation Gala, founded by her husband Jay-Z, 49, at the Hard Rock Casino in Hollywood, Florida in a super sexy sheer sequin dress on Nov. 16. The stunning number — which was custom designed by Roberto Cavalli — featured an off-the-shoulder cut, high slit and ostrich feather details on the top. She was the definition of glamour as she arrived in what appeared to be a faux fur wrap, diamond earrings and jewels by Lorraine Schwartz, and a pair of stunning high heels. The mother-of-two sported a deep burgundy lip when she smiled for fans while walking through the venue with her hubby right behind her. Jay carried around a cigar while looking handsome as can be in a fitted tux for their big night out.

Night two of the gala, which raises funds for individuals facing socio-economic hardships so they can further their education at institutions of higher learning, was attended by many celebs including singer Normani, 23, Good Morning America co-host Robin Roberts, 58, rapper Fabolous, 41, and Jay’s mother Gloria Carter. One of the guests there, child entertainer Dawan ‘Wanny Boy’ Brown, 13, was lucky enough to get a photo with the “Irresistible” singer which he happily posted on his Instagram. “No pictures please @beyonce” he joked in the caption.

It appeared to be a great night had by all at the Great Gatsby themed event. The foundation’s official Instagram page shared a bunch of Stories where guests happily mingled with one another and jammed out when Grammy-winning superstar Alicia Keys, 38, took to the stage. Beyonce looked equally as glamorous on Nov. 15 when she attended the gala’s first night in a curve-hugging glittery gold sequin dress and dazzling heels.

She had some very special guests with her that evening outside of her longtime hubby. Bey was joined by her mother Tina Knowles, 65, and father-in-law Richard Lawson, 72, who walked hand in hand behind her outside the event.