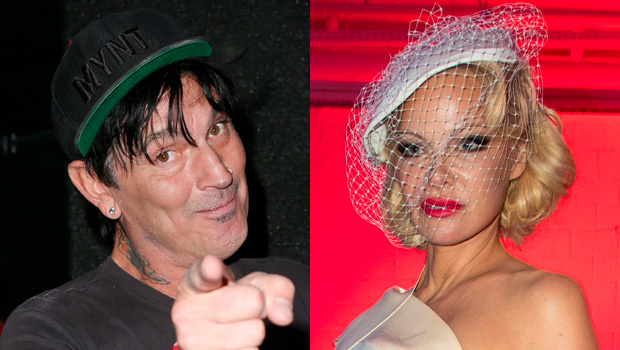 Pamela Anderson secretly married Hollywood producer Jon Peters yesterday and her ex-husband Tommy Lee has nothing but well wishes for her.

Pamela Anderson, 52, tied the knot with Hollywood producer Jon Peters, 74, in a private ceremony in Malibu on Monday, January 20. The pair, who’ve reportedly been dating since late last year, never went public with the relationship so the marriage news took the world by surprise. But, Pamela does have a history of surprise weddings. In 1995 she married Motley Crue drummer Tommy Lee, 57, just 4 days after their first date.

The pair had an infamously tumultuous marriage that lasted for three years — just long enough for them to have two sons, Brandon Thomas Lee, 23, and Dylan Jagger Lee, 21.  In the years since Pamela and Tommy haven’t always gotten along, but a source tells HollywoodLife EXCLUSIVELY that the rocker genuinely hopes his ex-wife has found happiness.

“Nothing will ever be the same for Tommy when it comes to his relationship with Pam,” the source tells HL, “it was a once in a lifetime relationship, with once in a lifetime experiences, but so much time has passed that what Tommy hopes for Pam, the mother of his children, now is that she is in a happy place with her new husband because if she wasn’t then there would be hell to pay.

“Tommy is happy for Pam even if they have their differences from time to time. Tommy has been able to move on with his love life so he feels that Pam should  have that same opportunity and he hopes that she is happy and has got exactly the life she wants.”

Last year Tommy married Brittany Furlan, 32, after two-years of dating and seems to have finally found his match. Of course fans of Pamela will know that she actually has more than one surprise wedding in her very colorful history. In fact it’s kind of a theme for her.

In 2007 she married Rick Salomon, 51 who may be best known for starring in Paris Hilton‘s 2003 sex tape, in a spontaneous Las Vegas wedding. The union was annulled after a few months. But in 2014 they gave it another try and remarried in yet another surprise wedding, only to divorce the following year. Pamela was also briefly married to Kid Rock. They married in July 2006 on a yacht in St. Tropez. It wasn’t a surprise but it also didn’t last and Pamela filed for divorce in November of that same year.