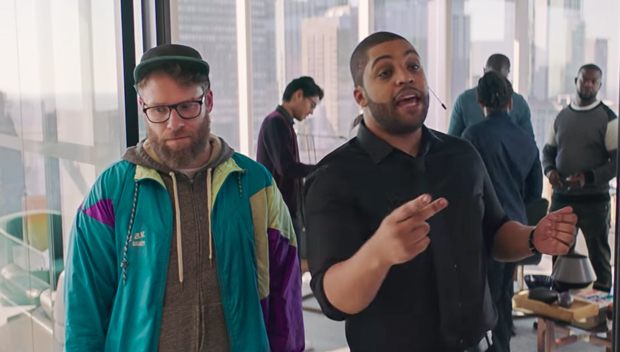 O’Shea Jackson Jr. Raves Over Working With Seth Rogen In ‘Long Shot’ ‘It Was Dope’

Despite jumping in front of the camera just four years ago in his breakout film, Straight Outta Compton, O’Shea Jackson Jr. already has a solid body of work under his belt. And now, he can add comedic actor to his resume with his latest film, Long Shot, which hits theaters on May 3. The 28-year-old actor, who plays Lance, the best friend of political journalist, Fred Flarsky (Seth Rogen), had high praise for his co-star at the New York premiere of Long Shot on Tuesday, April 30.

“It was dope. I feel like I’ve known him for years now because I’ve been such a fan,” O’Shea told HollywoodLife, exclusively. He went on to explain how Seth was in the room during his audition to discover who he connected with in order to fill the role as his on-screen best friend. “For him to choose me, and to feel the chemistry we had, you know, he needs to hire me again,” O’Shea said, laughing. “I was going to say something deep, but you know, he just needs to hire me. He knows it was dope. We need to knock it out again!”, he continued, adding that on a serious note, “The chemistry was there.”

Long Shot follows the unexpected, yet seamless romance between political journalist Fred Flarsky (Seth) and his first crush, who happens to be the current U.S. Secretary of State, Charlotte Field (Charlize Theron). Charlotte is also debating whether or not to run for President. The hilariously raunchy rom com takes an interesting turn when Charlotte hires Fred to be her speechwriter and sparks fly between the two.

While Seth is no stranger to the comedy scene, and Charlize can do just about anything on-screen, O’Shea had no shortage of resources onset when he needed comedic guidance. “They taught me just how serious you have to take it,” O’Shea said about studying his co-stars. “Charlize and Seth, you can tell after every ‘cut’ that they’re still focused, they’re still in it. — That’s something I will take on for future roles.”

As for the onset chemistry, O’Shea admitted that there were times that everyone couldn’t stop laughing. “We had to do multiple takes [because we were laughing],” he recalled. “You gotta bite your tongue to make sure you don’t laugh. You’ve got to learn a lot of tricks.”

O’Shea later explained how Long Shot helped him to break out into more versatile roles. “This is the biggest comedy I have,” he said, reminiscing on his past film, Ingrid Goes West. “That was a bit of a comedy, but ‘Ingrid Goes West’ was really dark. This is a lighter comedy. To have this under my belt, showing them that I’m here to stay. I’m trying to make some noise!”

He continued: “With ‘Long Shot’, every scene, we were looking for the funniness, the gold. They want you to improv and make it your own,” he said of the cast, director Jonathan Levine, along with the team of writers for film, including Dan Sterling. “The writers are studying you and seeing how your humor works and trying to write up something quick for you. Then, it’s up to you, on the fly, while the cameras are rolling to knock it out.”