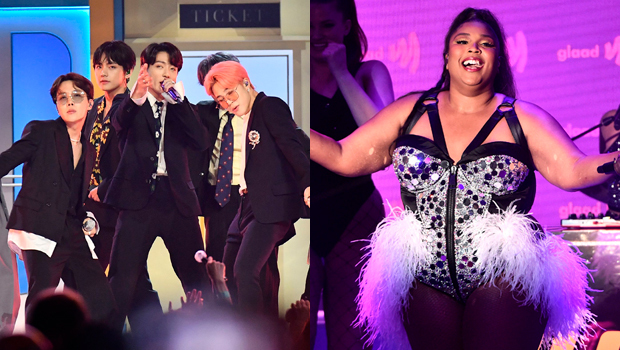 BTS Singing ‘Boy With Luv’ Perfectly Syncs Up To Lizzo’s Track ‘Juice’ & Fans (And James Corden!) Are Losing It

Fans went absolutely wild over BTS‘ performance of “Boys With Luv” on Saturday Night Live on April 13. But, a new fan discovery made people even more in love with the video. A Twitter user recently figured out that the K-pop group’s SNL choreography pairs well with the song “Juice” by singer Lizzo, 31! Her original tweet has more than 35,000 likes, and BTS fans like James Corden, 40, are reposting!

The original video poster tweeted the video with the new music, alongside her caption, “I’ve made a very important discovery and it’s that the ‘boy with luv’ choreo fits perfectly with juice by lizzo.” The late-night television show host reposted the video, saying, “I mean, best thing I’ve seen all day.” A fan replied to the original tweet, “this is. the only thing i care about oh my GOD.” Someone else replied, “This has made my life complete. Thank you.”

Fans immediately responded to James’ tweet, asking when BTS will go back on his show for a round of Carpool Karaoke. “James still waiting for a car ride and karaoke with the boys.. remember that you have fun with them since they are super friendly and fun,” one fan said.

Another fan was curious if the boys themselves had seen the clip, “Okay at this point everyone’s seen this but I wanna know that @BTS_twt has too!” We’re curious about it as well, but for now, we’ll just keep on enjoying the mash-up gift of BTS and Lizzo at once!