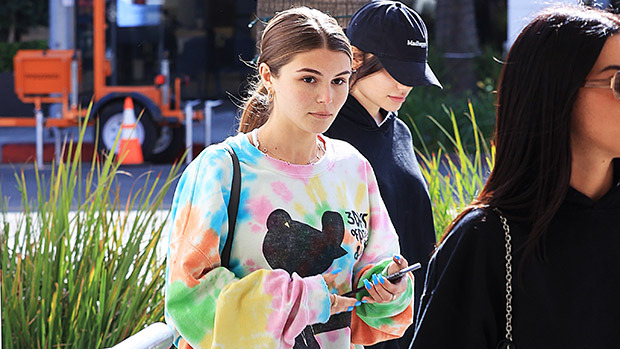 Olivia Jade channeled the 1960s and flaunted her gorgeous gams in a tie-dye mini dress and mod boots, as she still struggles amidst the college admissions scandal.

Olivia Jade Giannulli, 20, is living life as normally as possible as her parents prepare for their trial in the college admission scandal. The beauty blogger was spotted out and about in Beverly Hills on March 4 looking absolutely adorable in a tie-dyed sweatshirt dress and heeled cowboy boots as she headed to lunch with one of her friends. Olivia was keeping a low profile — well, as low as possible in that outfit — while strolling to the restaurant. Her Woodstock-inspired mini dress showed off her amazing legs and drew attention to her white boots.

She kept her hair slicked back into a low ponytail and went with minimal makeup for the outing. She manicure matched her outfit; you could see her electric blue acrylics as she played with her cell phone, and she rocked tiny gold hoop earrings and a necklace that spelled out Olivia. Check out the full-length pic of her outfit below. Olivia’s casual Wednesday came a little over three weeks after her fake rowing resume, allegedly submitted to the University of California to get her onto the crew team, leaked. HollywoodLife obtained the resume from the U.S. Department of Justice. It reveals that the author claimed Olivia scored multiple gold, silver, and bronze medals in national rowing competitions as a high schooler. Spoiler: she did not.

Olivia’s parents, Fuller House star Lori Loughlin, 55, and fashion designer Mossimo Giannulli, 56, are accused of paying $500,000 in bribes to officials at USC to get her and sister Bella Giannulli, 21, into the university as members of the crew team. Neither sister has any history of competitive rowing. Lori and Mossimo are due in court later this year after pleading “not guilty” to charges of bribery, fraud, and money laundering conspiracy.

This isn’t the first time that Olivia has been seen in public since the resume surfaced. She was spotted partying with Kylie Jenner in Los Angeles on February 10!