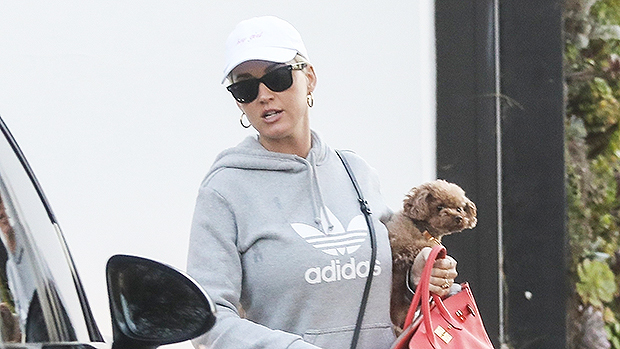 Katy Perry had her baby bump on display while running errands in Los Angeles! She stepped out just hours before officially revealing her bun in the oven in her new music video.

UPDATE (3/5/20, 12:29 a.m. ET): Katy Perry confirmed that she’s pregnant! Minutes after her baby bump made its YouTube debut in her “Never Worn White” music video on March 5, Katy took to Instagram Live to confirm that fans were seeing a real bun in the oven: “Let’s call it a reveal — there’s a lot that will he happening me this summer.” Katy added that she’ll be “giving birth — literally,” and that she and her fiancé, Orlando Bloom, are “excited” ahead of the birth of their first child.

ORIGINAL: Katy Perry, 35, has been spotted for the first time since those pregnancy rumors began! The “Firework” singer was seen leaving an office building and getting into a vehicle in Los Angeles on Wednesday, Mar. 4. Katy was low key and casual for the outing, opting for a classic gray Adidas trefoil hoodie and matching three strip leggings. She kept the sporty theme going with the iconic Superstar sneakers by Adidas, featuring black stripes. With her pair pulled back into a white cap, which hilariously read, “Hey Girl,” she also accessorized with a black pair of sunglasses and a luxe red Birkin bag by Hermes.

The American Idol judge was joined by her adorable dog Nugget, who is a micro teacup Poodle! Katy held Nugget in her arms as she entered the vehicle, as the pooch looked completely enamored by the scene. Perhaps strategically, Katy was both carrying the dog and her pricey Birkin bag in front of her tummy, potentially blocking a view of a growing baby bump!

Pregnancy rumors started after Katy posted a preview of her upcoming music video for “Never Worn White.” In the teaser clip, which invites fans to join her for the premiere, she can be seen cradling a growing baby bump. Immediately, fans began wondering if that was a way of her confirming she actually is pregnant. We guess only time will tell! 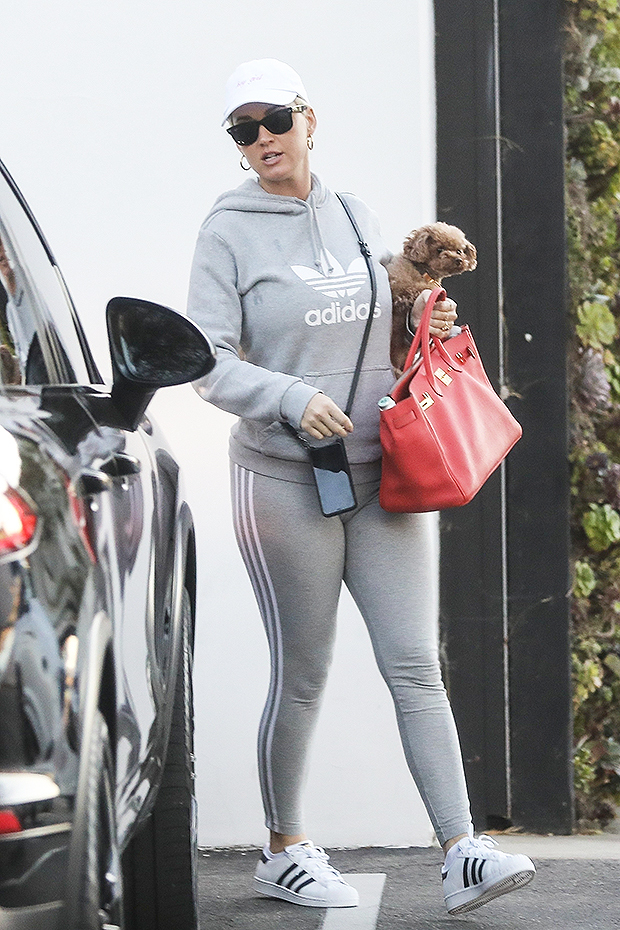 Katy, of course, is engaged to Orlando Bloom, 43, who is already a dad to son Flynn Christopher, 9, with ex Miranda Kerr. The Carnival Row actor has previously gushed about expanding his family with love of his life Katy. “I really want to enjoy family and friends, my beautiful son, and have more kids,” Orlando revealed in an interview with Man About Town back in Nov. 2019. “I want to make sure when I embark on that, it’s with my heart full and very clear about the reality of what that means, as opposed to some romantic idea of what it means to be in a relationship.” How sweet!

Orlando asked Katy to be his wife on Valentine’s Day 2019 with an intricate and unique flower-shaped ring! The engagement came after three years of dating, and the upcoming nuptials mark the second wedding for both: Katy was previously married to comedian Russell Brand, 44, from 2010 – 2012, and Orlando was married to Miranda from 2010 – 2013.