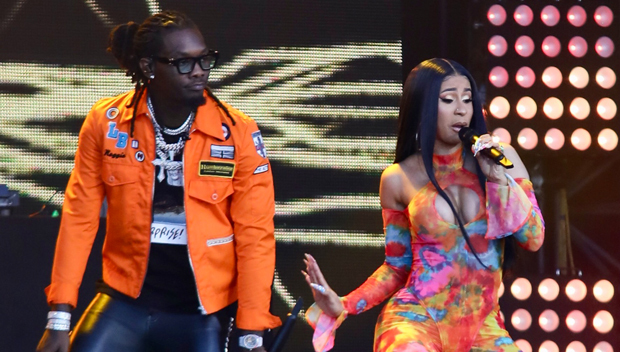 Cardi B, 26, and Offset, 27, were a united front on the Jimmy Kimmel Live! stage on July 17. The cheating scandal of early 2019 appeared to be far behind the parents of Kulture Kiari Cephus, 1, as they shared a kiss right in front of national television! Before hitting the stage, Offset started off the rap on the Hollywood Walk of Fame as curious onlookers followed the rapper (a few lucky pedestrians’ Twitter handles were even featured). Cardi soon stepped out on the sidewalk in a skintight jumpsuit in a tie dye print, and her presence immediately made fans shriek. The lovers then ascended the stage together!

Before performing a duet in Hollywood, Cardi and Offset participated in a fun segment of “New Lyrics for Old People” on the show. Jimmy helped bridge the gap between the lingo-heavy lyrics of “Clout” and baby boomers! “Straight out the streets to a penthouse, Miami beach — Yayo,” Offset began, which Jimmy translated to, “I came from humble beginnings and now I own a condominium in Florida.”

But Jimmy had an especially tricky line to decipher, when Cardi rapped, “Vagina still wet like a fat b**ch.” The television show host guessed that meant “I believe in free speech” and “I am sexually aroused,” which Cardi pointed out was incorrect — “Have you ever heard that like fat girls have better vaginas than skinny girls?” To that, the ABC host said, “Of course, my mom taught me that when I was young.”

Offset and Cardi also made an amazing team as they threw a $400,000 birthday party for Kulture in New York City on July 13. A party with a six zero price tag could afford a six-tier rainbow birthday cake, in addition to even more desserts and a Build-A-Bear Workshop!