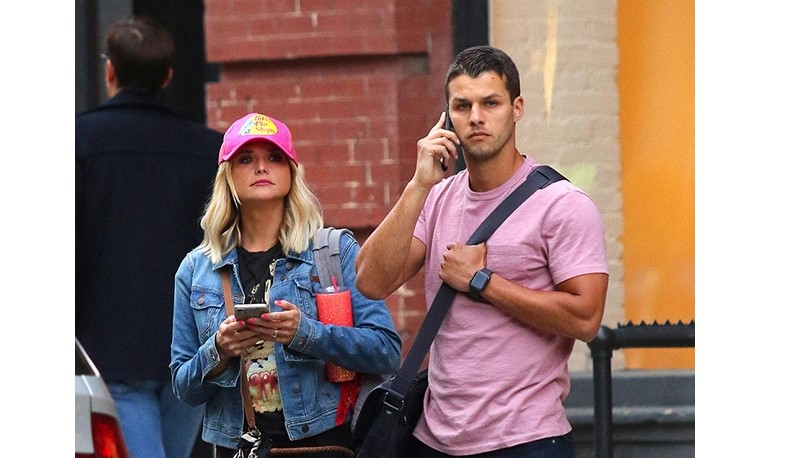 Miranda Lambert, 35, and Brendan McLoughlin, 27, have kept a super low profile since getting married at the beginning of the year, but they couldn’t avoid the cameras when they were out in the Big Apple on May 15. The lovebirds were standing on a sidewalk with luggage, seemingly waiting for a car to pick them up. Miranda looked cool and casual in a pair of black leggings, a t-shirt, denim jacket and hot pink hat. She also wore a brown fringed bag and had her blonde hair styled in loose waves. Meanwhile, Brendan wore jeans and a pink t-shirt.

Miranda and Brendan have been majorly low-key since she confirmed their romance in February. She revealed that she had secretly married the NYPD officer in a post for Valentine’s Day, and it was eventually reported that their nuptials took place in Tennessee on Jan. 26, just two and a half months after they first met. Although Miranda has never spoken out about the origin of the relationship herself, it’s been reported that she met Brendan while in New York City with her band, Pistol Annies, at the beginning of November 2018. Talk about a whirlwind romance!

Brendan made his official public debut with the country singer when he accompanied her to the ACM Awards in Las Vegas in April. The couple posed for tons of photos on the red carpet, although they skipped doing any interviews. Brendan was also happily cheering Miranda on while she performed during the show.

Interestingly, the 35-year-old made a point to take a dig at her ex, Blake Shelton, during the performance. Blake and his girlfriend, Gwen Stefani, were also at the ACM Awards, but left their seats while Miranda was onstage. She sang a medley of her biggest hits for the show, including “Little Red Wagon.” However, she changed the lyrics of the song from “I live in Oklahoma” — where she resided with Blake while they were married — to “I got the hell out of Oklahoma.” BURN!

Miranda and Brendan have had the chance to spend plenty of time together over the last several months, but their relationship will definitely be tested this summer and fall when she’s on tour.