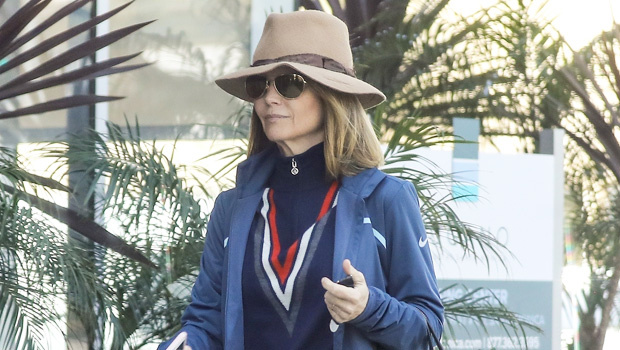 Despite her best efforts to apparently go full Carmen Sandiego, Lori Loughlin was still recognizable while out and about in Los Angeles on February 19. The Fuller House actress, 55,  was spotted running errands while keeping a low profile in a wide-brimmed hat, oversized, tinted sunglasses, and a casual outfit: slim pants, slip-on sneakers, a pullover, and a Nike windbreaker.  It’s a rarity to see Lori out in public since she was hit with another charge in the college admissions scandal; the last time she was seen, the actress was cruising around Beverly Hills in a Mercedes, while wearing what appeared to be the same sunglasses.

Just days before Lori’s most recent outing, her daughter, Olivia Jade Giannulli‘s fake resume surfaced. The resume, which was reportedly sent to the University of California to show that Olivia was qualified to be on their rowing team, was filled with false information. It claimed that Olivia, 20, who has never rowed competitively, allegedly earned two gold medals, two silver medals, and two bronze medals on her high school rowing team — which she wasn’t on. While the rowing team did compete in the meets listed on the YouTuber’s alleged resume, none of the scores matched the real results.

Nevertheless, the resume says that, “Although Olivia is non-scholarship she is highly talented and has been successful in both men’s and women’s boats.” It also mentions that her sister, Isabella Giannulli, 21, was already on the USC team. It’s believed that Bella was also admitted to USC fraudulently on the basis of a nonexistent rowing career.

Lori and her husband, fashion designer Mossimo Giannulli, 56, have both been charged with fraud, money laundering conspiracy, and bribery in the FBI’s college admissions scandal for allegedly paying $500,000 to get their daughters into the university. Both of their daughters no longer attend USC.