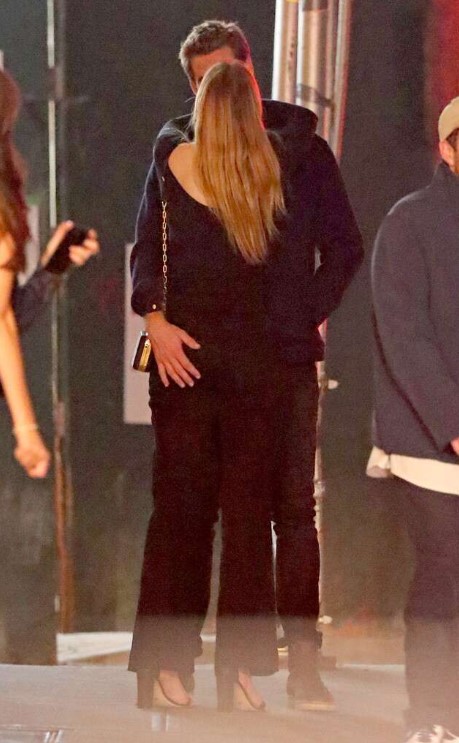 Liam Hemsworthand Dynasty actress Maddison Brown are showing more than a little bit of PDA. It’s safe to say that things are definitely heating up between the Australian stars. On Thursday night, the two were spotted kissing on the lips—while the actor put his hand on the actress’ behind, and sharing a warm embrace while walking the streets of New York City. It appears that the rumored couple stopped for a quick PDA session after grabbing a drink at The Flower Shop bar and viewing a show at the Alley Cat amateur theater.

For the date night, Maddison sported a classy navy blue long-sleeve shirt and slacks, while Liam went for a more casual look in black jeans and a navy blue bomber jacket.  This is the second time the pair has been seen together, the first being their lunch date in NYC’s West Village. In all, the recent outings have proved two things to fans; the first being that they make for a rather fashionable duo and the second is that they’re very comfortable with showing PDA.

An eyewitness previously told E! News that Liam and the 22-year-old “held hands and walked very close to each other” after enjoying a lunch on Thursday. But perhaps the actors are so comfortable with each other because of the many things they share in common? For example, Maddison is an actress and hails from Liam’s home country of Australia, plus she’s dabbled in modeling like Liam has for many magazines, clothing brands, etc.

Maddison truly seems like a good fit for the star as he says goodbye to the life he once lived with ex Miley Cyrus. In August a source told E! News that the Hunger Games star thoroughly put an end to his on-again, off-again relationship with Miley by filing for divorce. “Liam is just done with it. There is no turning back and he knows he wants to move on,” the insider explained. And Miley has obviously moved on too. Since their split, she’s dated Kaitlynn Carterand is currently enjoying a fling with singer Cody Simpson.