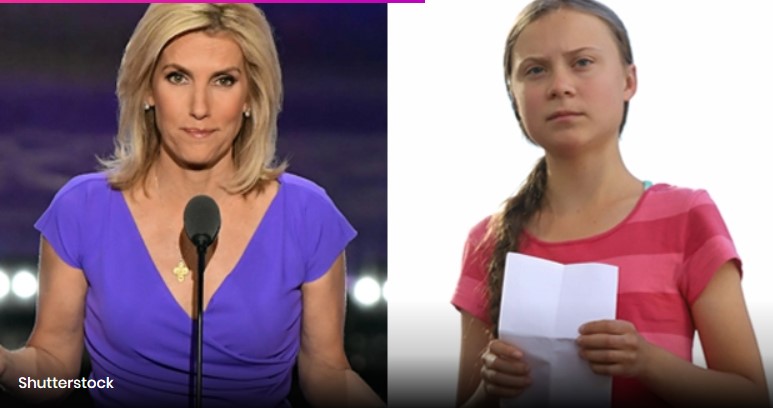 ORIGINAL: Greta Thunberg‘s powerful speech at the UN Climate Summit on September 23 spurned as much scorn from the Right as it did praise from the Left. The 16-year-old environmental activist, who rose to fame after protesting for climate change reform outside the Swedish parliament building for a year, called out world leaders at the United Nations for “coming to us young people for hope,” rather than actually doing anything. Fox News host Laura Ingraham, rather than being moved by Greta’s speech, mocked the teenager and compared her to the murderous kids from a Stephen King movie.

“Anyone else find that chilling?” Laura said, before playing a clip from the 1984 horror movie Children of the Corn in a segment called Climate Change Hysteria Is Changing Our Kids. “I can’t wait for the Stephen King sequel, Children of the Climate. Now the Left, if they ever get in power, will simply use the excuse of climate change to reward their friends.” The Ingraham Angle host was roundly criticized for mocking a child, but no remark cut so hard as that from her own brother. “Clearly my sister’s paycheck is more important than the world her three adopted kids will inherit. Curtis Ingraham tweeted on September 23. “I can no longer apologize for a sibling who I no longer recognize. I can and will continue to call out the monstrous behavior and the bully commentary born out of anger.”

Right-wing figures are clearly terrified by Greta and the power that this girl wields. Her UN speech was haunting, and inspiring to a generation of activists who are simply asking that the people in charge don’t let the planet die. “If you choose to fail us, I say, we will never forgive you,” Greta said, on the verge of tears. “We will not let you get away with this… The world is waking up, and change is coming, whether you like it or not.”

“This is all wrong. I shouldn’t be up here. I should be back in school on the other side of the ocean,” she continued. Greta, who doesn’t fly because of the impact on the environment, sailed for 13 days to the United States from Sweden on a zero-emissions boat. Since in the US, she’s spoken to Congress, led children in the Global Climate Strike, and now, spoken at the UN. “Yet you all come to us young people for hope. How dare you? You have stolen my dreams, and my childhood, with your empty words. And yet, I’m one of the lucky ones. People are suffering. People are dying. Entire ecosystems are collapsing. We are in the beginning of a mass extinction. And all you can talk about is money and fairytales of eternal economic growth. How dare you?”