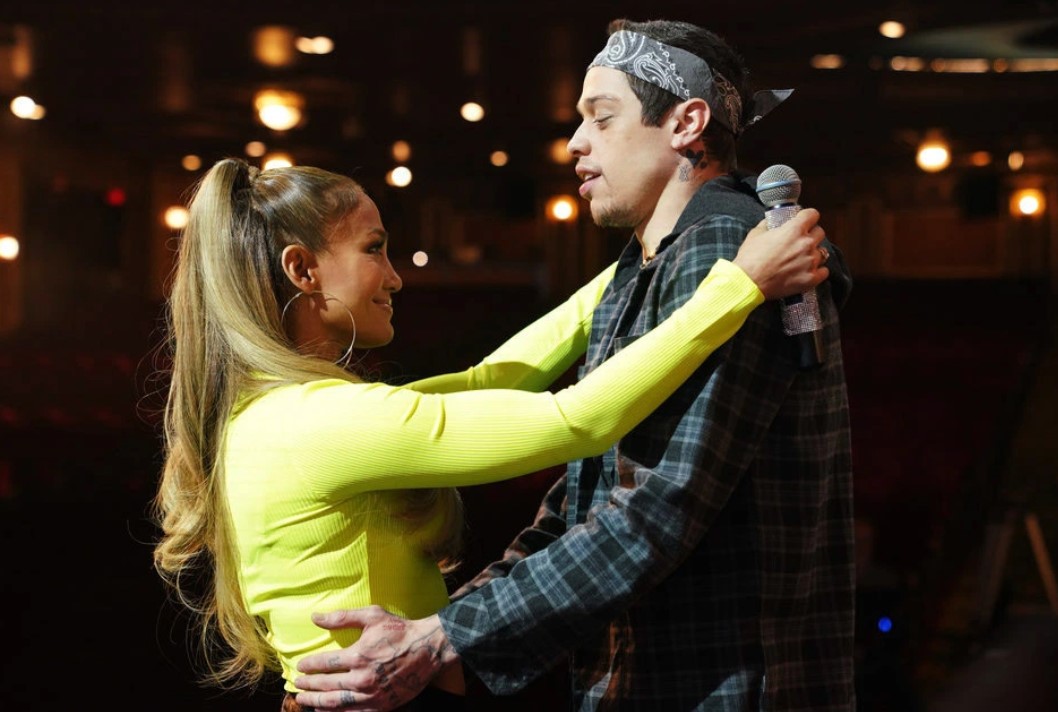 Jennifer Lopez, 50, slayed in this hilarious Saturday Night Live skit which was easily the highlight of the night! In the sketch, the “Love Don’t Cost A Thing” singer was rehearsing in an empty concert venue as she spotted a young roadie moving equipment. The man was none other than Pete Davidson and Jen was immediately liking what she saw! Deciding to strike up conversation, she introduced herself to the 26-year-old — playing “Chad” — who had apparently never heard of the internationally famous superstar. “I’m Jennifer Lopez — didn’t you hear me singing?…Did you like what you heard?” she asked as he bluntly answered, “no.” Ouch! In her head, Jen noted that his response was “so…refreshing!”

“You know, I appreciate your honesty — since we’re being honest — I have a little confession,” she revealed to Pete’s Chad. “Ever since I saw you, I haven’t been able to get you out of my…I shouldn’t have these feelings for you, I just got engaged, I’m in love with Alex” — as he confusingly asked “Who dat?” She continued, “A-Rod? He was a Yankee!…I’m sorry Chad, it’s crazy….it’s funny when you’re up here on stage around thousands of people screaming your name, it’s easy to get lost in it,” she continued. She then asked him to dance, and the two were looking pretty flirty as they were interrupted by none other than Alex Rodriguez, 44, himself! “Alex, um, this is my new choreographer,” she tried to explain to her fiancee, who sweetly arrived with a bouquet of flowers. Immediately realizing what was happening, the former baseball star threw the flowers aside and delivered a line straight out of a daytime soap: “I hope you’re happy” he fumed, followed by a dramatic exit. “Alex, wait! Chad, I have to go after him,” Jen exclaimed.

The sketch was also a tongue-in-cheek look at Pete Davidson, who has hit the jackpot when it comes to dating some of Hollywood’s hottest ladies: he was previously engaged to Ariana Grande, 26, had fling with Kate Beckinsale, 46, and is currently dating Kaia Gerber, 18, just to name a few.

Jennifer’s SNL appearance coincides with her awards season campaign for the critically acclaimed film Hustlers, where she plays sexy stripper Ramona at the height of the 2008 economic recession. With club profits (and tips) on the decline, she quickly devises a scheme with Costance Wu‘s Destiny to keep the cash coming in! Jen’s SNL appearance marks her third at Studio 8H as host: she made her debut in 2001 where she performed her iconic hits “Love Don’t Cost a Thing” and “Play” ahead of the release of The Wedding Planner, and pulled double duty again in 2010 to promote romcom The Back-Up Plan, making this the first-time she did not appear as musical guest.

Of course, fans are counting down until Jen ties the knot with A-Rod! The Bronx native is no stranger to weddings, with her upcoming nuptials marking wedding number four and engagement number five: Jen tied the knot with her first husband Ojani Noa back in 1997, but divorced the Cuban actor the following year. She then infamously dated Diddy — even appearing in his iconic music video for “Been Around The World” — but after their split, quickly married her back-up dancer Chris Judd in October 2001, only to file for divorce nine months later.

From there, the “Love Don’t Cost A Thing” singer dated then got engaged to Ben Affleck— who could forget that infamous pink diamond — but Bennifer 1.0 never made it down the aisle. Only six months later, Jen married her longtime friend Marc Anthony in a private 2004 ceremony. The pair welcomed twins Max and Emme in 2008, but divorced after seven years in 2011.

There’s even a connection between one of her former flames and SNL: Ben Affleck’s ex-girlfriend Lindsay Shookus is a longtime staffer at the NBC show, and even attended a cast dinner with Jen earlier this week! Alex has been right by Jen’s side as she prepared for her SNL appearance, also attending the dinner at Italian hotspot Lattanzi Ristorante on Dec. 3.