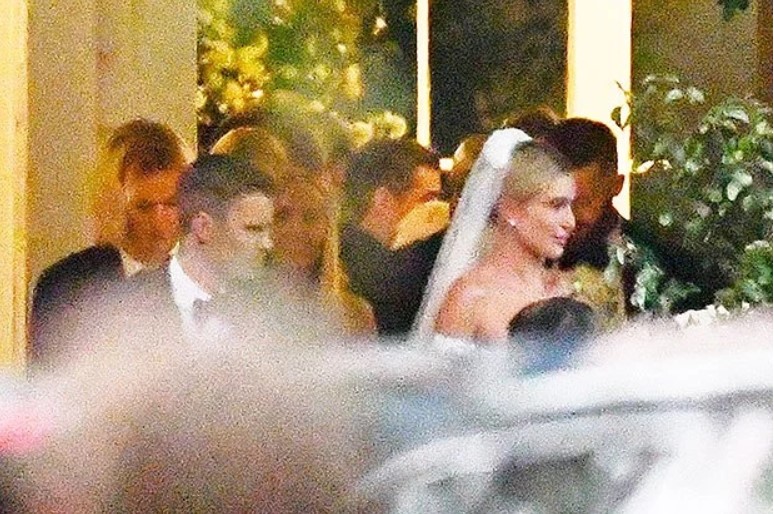 Hailey Baldwin‘s wedding dress is here, and it’s spectacular. The model married Justin Bieber for a second time on Sept. 30, and she looked beautiful in a white off-the-shoulder gown, complemented by a veil with a long trail of tulle cascading down her back — a traditional bride! Hailey has waited a year to wear this dress, since she revealed that she had chosen the designer in a Sept. 2018 interview with The Cut. She also wore an off-the-shoulder dress for her rehearsal dinner on Sept. 27, which was a vegan silk piece from the couture collection of Vivienne Westwood.

When Justin and Hailey first got married, it was a simple courthouse wedding on Sept. 13, 2018. They signed the right papers and walked out as husband and wife…while wearing their casual streetwear. After more than a year of planning, though, Hailey and Justin finally had their official ceremony, where they got to celebrate their union with family and friends for the first time. This meant that Hailey finally got to wear the wedding dress of her dreams, and she was the most stunning bride EVER!

Of course, Hailey’s groom was just as handsome as ever in his black tuxedo on the big day. These two have already been living life as a married couple for more than one year, but it’s clear that they’re as in love as ever as they tied the knot for a second time. They held their second ceremony at a Southern dream spot — the Montage Palmetto Bluff in Bluffton, South Carolina — and exchanged vows inside the hotel’s Somerset Chapel in front of 154 guests, according to PEOPLE.

A-listers turned out to see Mr. and Mrs. Bieber make their lifelong commitment to one another, like Kendall Jenner, Kylie Jenner along with her daughter Stormi Webster, Kris Jenner, Corey Gamble, Jaden Smith, Joan Smalls, Fai Khadra, Camila Morrone, Jen Atkin and Justin’s music manager, Scooter Braun! Of course, all the Baldwins were there: Hailey’s dad Stephen, her uncle Billy, sister Alaia and cousin Ireland. Even Justin’s parents (who are now separated), Pattie Mallette and Jeremy Bieber, made it to the nuptials! After the ceremony, Hailey changed into a white halter-neck dress and even donned a leather Celine jacket, which had “Wife” appropriately sprawled across the back.

Getting to the altar hasn’t been the easiest road for Justin and Hailey. The model was still a teenager when the pair first dated in 2015 and 2016, and after the split, they were estranged for more than two years. However, they rekindled their love in the spring of 2018. After less than two months together, they got engaged that July, with the courthouse wedding taking place another two months later. Both stars have been open about the difficulties of marriage, but are extremely committed to one another and making sure their union lasts forever. Congrats to the happy couple!