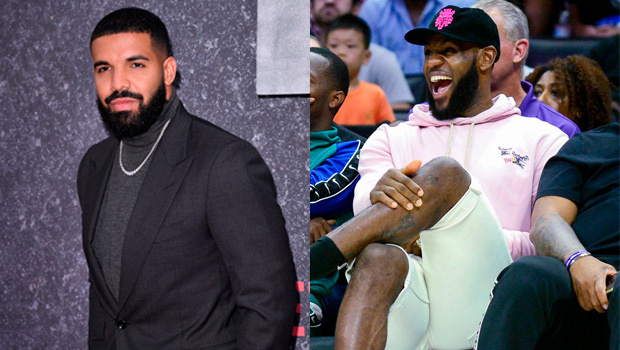 Drake Chills Courtside With LeBronJames 2 Days After Reuniting With KylieJenner

Drake and LeBron James looked like they were having a blast with one another while watching the latter’s son Bronny play basketball!

A day in the life indeed. Drake, 33, and LeBron James, 35, appeared to be the best of buds at a basketball game at Pepperdine’s Firestone Fieldhouse near Malibu, California, on Saturday, March 7. They sat courtside with one another while LeBron’s son Bronny, 15, played hoops for his Sierra Canyon High School team. The singer/rapper and NBA legend engaged in lively conversation during the 40-second long clip with each dressing appropriately for the occasion. Drake sported a Nike cap and sweatshirt with black pants while LeBron got a little more colorful with his yellow beanie and a bunch of jewelry around his neck. The “Hotling Bling” crooner must have said something interesting to get LeBron’s attention as he sat forward the minute they started talking. What makes this clip even more amazing is that Drake’s number one hit “Nice For What” was blaring through the speakers during the footage!

You can’t hear what they are saying but you can definitely feel vibes from how animated each of their faces got. Drake looked to have gotten someone they both like on FaceTime at one point as both men were seen making hilarious faces to his iPhone camera before the clip ended. Their enigmatic (and very handsome) smiles were on display amid Bronny’s big game where his Sierra Canyon team eventually won with a 75-65 victory. Drake, who is known for his over the top sidelines antics while watching his Toronto Raptors play, was playfully mocked on social media after fans witnessed his interaction with LeBron. “Drake the biggest groupie in sports,” one joked.

Drake got people talking in a different way on Thursday, March 5, when he was seen leaving a club in Los Angeles with Kylie Jenner, 22.  It was a night out on the town the 22-year-old mother of one, as she along with BFF Stassie Karanikolaou, assistant Victoria Villarroel, and other friends started their evening at The Nice Guy before making their way to Delilah in West Hollywood which he was at as well.

This isn’t the first time that Drake and Kylie have sparked romance rumors after her split from Travis Scott, 27. They were first linked when the 22-year-old cosmetics mogul attended his blowout 33rd birthday bash on Oct. 24, 2019. He rented out Hollywood’s Goya studios for a mobster themed-party, and Kylie was reportedly “never too far away” from Drizzy that evening.