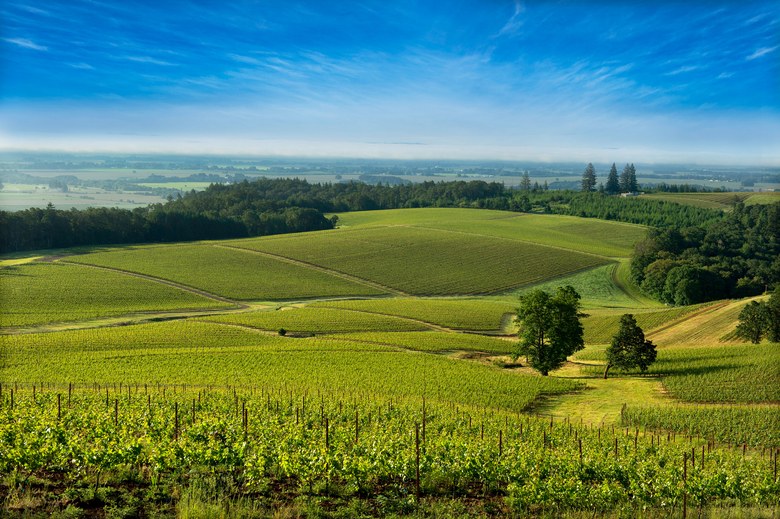 Destination for Your Next Weekend

Just an hour south of Portland lies McMinnville, Oregon, a town so charming it looks like a Pacific Northwest version of the Gilmore Girls’ fictional Stars Hollow. Home to some of the Willamette Valley’s best wineries (it hosts the state’s annual International Pinot Noir Celebration) and restaurants (it was named one of “America’s Foodiest Towns” by Bon Appetit), its main drag has even earned a Great Street award from the American Planning Association. “There are lots of beautiful towns that happen to have vineyards surrounding them,” says hotelier and McMinnville native Erin Stephenson. “But what makes McMinnville special is the passion of our owner operated businesses.” A great number of these owners happen to be women who were born and raised in the town. Combine all these ingredients and what you have is a perfect destination for a girls’ getaway.

“We are mostly childhood friends who grew up together, ventured out into the world and ultimately felt the calling to return home. Now, we all own and operate our businesses within a few blocks of one another,” says Lindsay Woodard, owner of Retour wines, a sixth-generation Oregonian who launched her own label while still in her twenties, making her one of youngest women to start a winery in the Willamette Valley. “Retour is the French term for going back or returning home,” she says. “While I was born and raised in McMinnville, I moved to the Napa Valley, where I started my first company, before returning home to my roots and reuniting with this core group of female entrepreneurs who empower one another.”

So how best to while away a weekend celebrating female friendship and entrepreneurism? “Just embrace of the charm of downtown McMinnville,” says Woodard. Thats means dumping the car for the weekend, grabbing one of Visit McMinnville’s complimentary pick up and drop off umbrellas (the town averages 46 inches of rain per year), and exploring the town on foot. “There are more than 35 restaurants and 16 wineries in a five block radius,” says Stephenson. If you do tire of the area around 3rd Street, stroll on over to the edgier Granary District where former animal feed silos have been transformed in stylish urban wineries, breweries, and shops. “McMinnville is changing so fast and it’s very exciting,” says Woodard. “This next generation of local business owners can carry forward what we’ve always loved about McMinnville and preserve it for everyone.”

Erin Stephenson’s Third Street Flats bed and breakfast is spread out over two historic buildings located several blocks apart in the heart of town—the former McMinnville Bank and Order of the Odd Fellows Lodge. Each of the apartments has a private bathroom and kitchen, and some have fireplaces, but neither location has a lobby so the bar at The Bitter Monk serves as a check-in for the bank’s guests, while guests staying at the Odd Fellows location can pick up their keys at the R.Stuart & Co. Wine Bar (along with a complimentary wine flight). “The flats are really popular for girls’ weekends,” she says. “Groups often rent out the whole building.” On April 1st, 2018, Stephenson will also open the Atticus Hotel, the town’s first full service hotel, which will include a luxury bunkhouse (ideal for those aforementioned girl gangs) including built-in bunk beds, complimentary bicycles, and an outpost of Portland’s cult Bless Your Heart Burgers.  Also on 3rd Street is the quirky McMenamins Hotel Oregon, home to the town’s annual UFO Festival. McMinnville native and GM Dani Chisholm oversees the 42 room property. It has two bars, a restaurant, and live music several nights a week. Don’t miss the rooftop deck, which offers sweeping views of the Willamette Valley.

“When I was growing up the only real restaurant in town was Nick’s,” says Woodard. “It’s been amazing to see the evolution of the dining scene.” Opened by Nick Peirano in 1977, the James Beard Award winning Nick’s Italian Cafe is now run by his daughter Carmen and acts as the town’s unofficial clubhouse for local winemakers. Try the signature Dungeness crab and pine nut lasagna before moving to the Back Room to shoot some pool and continue working your way through the wine list.  Across the street, local Emily Howard runs front of house at Thistle, one of the top farm-to-table restaurants in the state. “Their bartender Patrick Bruce also makes the most amazing cocktails,” says Woodard. Thistle sources their ingredients from over 13 local farms including Emily’s mother Beth’s own garden. Since opening in 2003 Bistro Maison has become another McMinnville institution. “The patio is my favorite spot in town,” says Woodard. Owners Deborah and Jean-Jacques Chatelard moved to Oregon from New York City to open this Parisian inspired bistro. Deborah runs the front of house and curates the wine list, while Jean-Jacques runs the kitchen. “You have to order the Oregon White Truffle Fondue,” says Stephenson.

Make an appointment to stop by Lindsay Woodard’s new Retour tasting room one block north of 3rd Street where she personally hosts and pours the wines—three Pinot Noirs and a Rosé—while teaching customers about terroir and viticulture. Woodard also recommends booking a tasting at Remy Wines baR, owned by fellow McMinnville High alumni Remy Drabkin who left to study winemaking in Burgundy before returning home to start her eponymous brand focused on Italian varietals. A few blocks away you’ll find third generation Oregonian and second generation winemaker Liz Chambers’s winery and tasting room, located in the town’s old power station. Chambers moved to McMinnville in 2013 to establish her own boutique label, Elizabeth Chambers Cellar, specializing in Pinot Noir and Pinot Gris. Beer lovers should head over to The Bitter Monk on 3rd Street to sample Heater Allen’s German and Czech-style specialty beers. Head brewer and McMinnville native Lisa Allen (her father Rick Allen founded the business in 2007) recommends the Pils, a Bohemian-style pale lager, or the Schwarz, a chocolatey dark beer with lower alcohol content. “In a wine-focused town they have put together a really well-curated tap list for beer drinkers,” she says. “The Back Room at Nick’s Italian Cafe always has our Pils on tap too.”