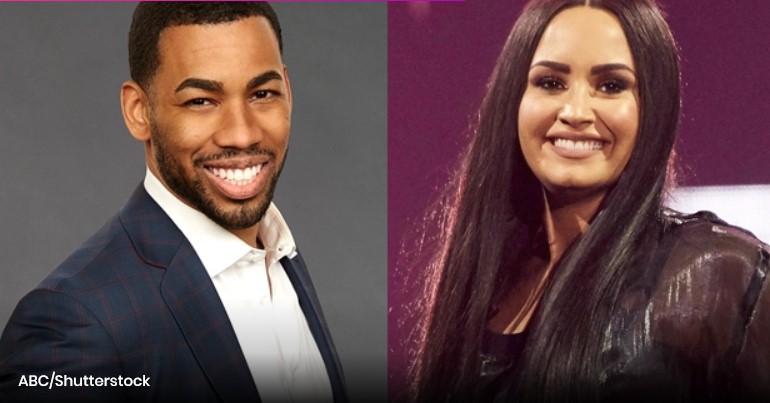 Mike Johnson, 31, may have not been Hannah Brown‘s pick on The Bachelorette, but he’s got the attention of Demi Lovato, 27! “Demi Lovato and Mike Johnson from The Bachelorette were definitely on what looked like not a first date at LaScala in Beverly Hills on Friday, September 13. They looked happy,” an insider spills EXCLUSIVELY to HollywoodLife. “They were there about an hour and a half or two hours and sat by themselves.” Demi reportedly enjoyed “flat bottled water, a chopped salad and some soup” on the date. The date seemed to go well, as “Demi couldn’t stop laughing and they came in through a back entrance.”

The sighting comes after back-and-forth flirtation between the two on social media, which started with Demi gushing over her reality crush earlier this summer. “Mike, I accept your rose,” she posted on her Instagram story after Hannah dumped him, which social media couldn’t get enough of. When HollywoodLife EXCLUSIVELY asked Mike about his thoughts on Demi in July, he enthusiastically responded, “Hell yeah I would go on a date with Demi Lovato! She is freaking sexy as can be. I don’t know her personality, so I’d have to get to know her, but I would entertain a conversation…”

The flirtations continued when Demi posted a raw, unedited bikini selfie revealing her cellulite last week. The body positive message drew several comments, including one from her crush Mike himself! “Look at me like that again,” he wrote with a smirking emoji, then added “Love yaself.” While it’s unclear when they took the flirting offline, it appears romance is blooming. “Mike clearly wanted to make sure he got to see Demi again as he kept asking what her travel schedule was like coming up [on the date],” the insider also added. “They’ve been out a few times only and it seems to be very, very early on, but it seems that they really are trying to date!”

Demi isn’t the first Hollywood star to be linked to a contestant from Bachelor Nation: Sarah Hyland is now engaged to former Bachelorette contestant Wells Adams, and supermodel Gigi Hadid has been dating Hannah Brown’s runner-up Tyler Cameron since July. Both couples seem happy and in-love, so perhaps Demi and Mike aren’t far behind?