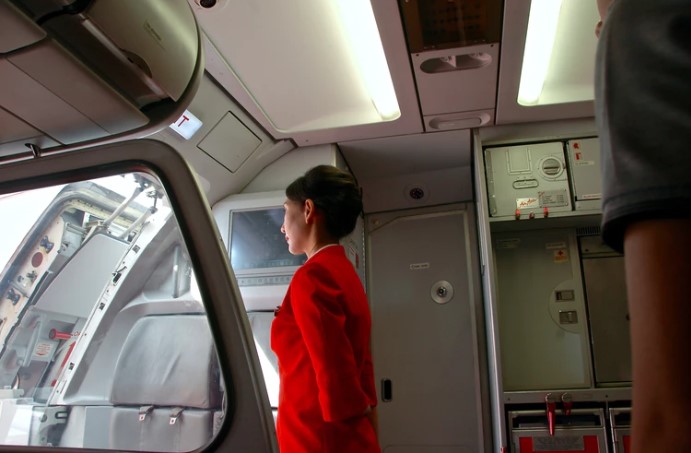 FLIGHTS are not considered particularly glamorous in this day and age, but in travel’s heyday, flying was considered a rare luxurious experience – and airline staff had to portray that, as this 93-year-old former air hostess revealed. Flights in the 1950s were a very glamorous affair indeed and saw travellers wearing their Sunday best suits and dresses for the occasion.

The fight attendants were all female and their fashion requirements were very strict. In the 1930s and 40s, uniforms for the first flight attendants, dubbed “air hostesses”, were military inspired, but femininity and glamour became key in the 50s and 60s. An air hostess who served with United Airlines in the USA in the early 1950s has revealed to Express.co.uk what fashion rules they had to follow. Ethel was based in Seattle and flew DC-3s, 4s, 6s, before jets were introduced in 1959.

She had to take a lot of care over her airline uniform – which has changed 37 times from 1930 to today. According to The United Airlines Historical Foundation (UAHF), air hostesses wore navy blue wool gabardine single-breasted jackets of a fitted design with matching covered buttons. “It was worn over a white short sleeve rayon blouse with a notched collar,” wrote the UAHF website. “The matching suit skirt of slim design featured a front and back kick pleat.”

However, for Ethel it’s the hats that went with this uniform that stand out in her memory. “Uniform hats were worn all the time as they wanted to keep the ‘stewardess look,’” she told Express.co.uk.According to UAHF: “The overseas style hat in matching fabric had multi-rows of top stitching and was worn through 1956.” Ethel added that the rule for the crew to always wear hats was eventually changed. The strict rules did not prevent Ethel from appreciating her time with United Airlines.

“I enjoyed being a stewardess, living with roommates in Seattle and travelling and learning about the United States, it was a great experience for me,” she said. Ethel went on the become America’s First Airport Tour Guide in 1956 at Los Angeles airport. “Tours were given to school children and adults to interest all in flying, and to make them comfortable with the airport, airplanes and flight,” Ethel explained. “Flying gave the passengers more time to enjoy their destination, ticket prices were affordable, hence the growth and need for more passengers’ space.”

She added: “Looking back in time at how far LAX has come, it seems to adapt to its growth and increase in passenger totals well and we look forward to seeing it continue to reach its potential. “The airport has been undergoing a USD $14-billion modernisation program over the past nine years, and the refreshing of the terminals is ongoing to create a more convenient and efficient travel experience for passengers.”