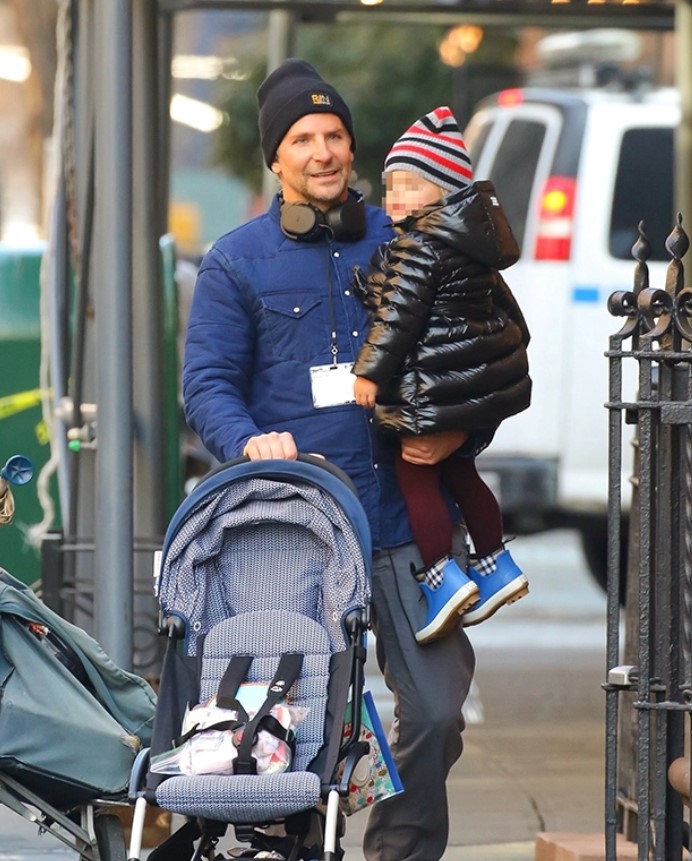 Though Manhattan has been experiencing a bit of a “heatwave” (it’s expected to be in the high 50s today), it still can get a bit brisk when the wind blows. Thankfully, young Lea De Seine Shayk Cooper was prepared when she joined her daddy, Bradley Cooper, for their walk on Nov. 25. The 2-year-old girl wore a warm-looking winter coat with an adorable blue-and-red striped hat. Bradley, 44, also seemed nice and toasty in his blue jacket and knit hat. While these two were out and about, it appears little Lea didn’t want to stay in her stroller, and Bradley scooped her up in his arms – which also gave her a chance to show off her adorable boots! How precious.

This NYC trip comes days after Irina Shayk, 33, took her daughter for a walk and four months after she and Bradley finalized their custody agreement. The couple, who announced their split at the start of June, didn’t pull a Brad Pitt-Angelina Jolie by dragging out the process for years. About a month after their announcement, the couple reached an agreement: they’ve reportedly agreed to live in the same area and split custody 50-50. They also deiced to forgo settling custody in a courthouse and agreed to the terms themselves.  Shortly after reaching the agreement, Irina was all smiles while taking Lea for a stroll in New York City.

No matter what the weather, Bradley is ready to make time for his little girl. While spending some time in Brentwood, California in August, Bradley and Lea apparently hit up a farmer’s market for some snacks. Photos of the A Star Is Born star and his daughter show him carrying Lea in one hand, and a bucket of veggies in the other. Of course, what most fans gawked at was not the adorable tot in his arms, but the mustache that Bradley had grown on his top lip!

“Bradley Cooper is turning into Jeff Foxworthy,” one fan tweeted at the time, and they weren’t wrong. In fact, Jeff shared a side-by-side of the Silver Linings Playbook star and himself and beamed with pride. “My wife is so happy right now!” commented Jeff. As to why Bradley grew the mustache, it’s likely for his role in Guillermo del Toro‘s adaptation of the 1947 film Nightmare Alley, in which Bradley plays a con-man. Or, it could be for his role in Atlantic Wall, which is about “an American soldier trapped behind enemy lines on the eve of D-Day.”