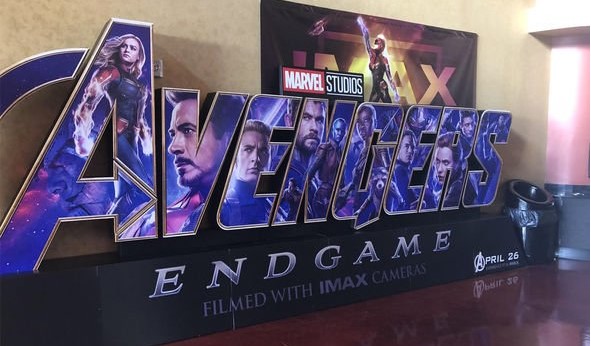 A Reddit user posted a photo of the new standee at their local IMAX cinema. At first glance, the standee looks like most other Marvel promotional material. But look closer and you’ll realise it puts Captain Marvel at the head of the Avengers; literally. Carol Danvers, played by Brie Larson, takes up the A and is both larger and more prominent than the other superheroes.

Though this might irk some, Marvel boss Kevin Feige himself has clarified where Danvers will fit in the larger MCU. Speaking to comicbook.com, Feige said: “When we found out that Brie Larson might be interested in joining our world, we had a number of meetings.

“She was a huge fan of the character in the comics.

“One of the highlights of my career at Marvel was introducing her at Comic-Con and having her come out on stage and stand there with literally almost everybody else from our movies.

“There she was at the forefront, and it was a great foreshadowing – not just for how audiences are going to embrace Brie as this character, but also for how Captain Marvel is about to take the lead and be at the forefront of the entire Cinematic Universe.”

You read that right: Captain Marvel will take the lead of the next generation of Avengers. Feige went on to describe Captain Marvel’s perfection for the role. He said: “The great thing about Captain Marvel is she is a human.

“She’s a real person, Carol Danvers, who gets these incredible powers and who has these amazing adventures in outer space.”

“But as with all of the best Marvel characters, she needs to be very human.

“So this is not just about somebody who is incredibly powerful and can fly around and shoot photon blasts out of her hands; it’s somebody who’s very human, who’s very vulnerable, and who has multiple dimensions.”

For many, this may ring bells with Captain America (Chris Evans), whose vulnerability and emotion have made him a fan favourite. There is no official leader of the MCU, but many fans count Tony Stark (aka Iron Man, played by Robert Downey Jr) and Captain America as the de facto leaders. With both actors’ contracts rumoured to be up, many suspect Captain Marvel will take on the burden of leading the new generation of Avengers with Black Panther aka T’Challa (played by Chadwick Boseman).