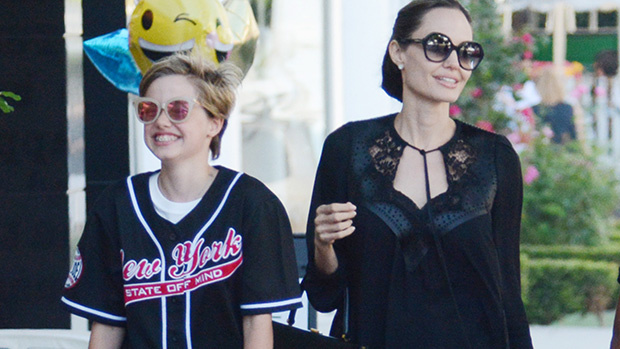 Happy Birthday, Shiloh Jolie-Pitt! Angelina Jolie and Brad Pitt’s daughter turned 13 on May 27, and while Brad was at Cannes to promote his new movie, Angie took all the kids out for a wild birthday bash!

Brad Pitt, 55, is going to be sad he missed this party. While he was reportedly “out in Europe being a tourist” after a successful showing of his new movie, Once Upon a Time in Hollywood, at the Cannes Film Festival, The Blast reports that his ex, Angelina Jolie, 43, celebrated their daughter, Shiloh Jolie-Pitt, turning 13 with an amazing party. Angie, according to The Bast’s sources, took Shiloh and her siblings — Maddox, 17, Pax, 15, Zahara, 14, and twins Vivienne and Knox, 10 – to The Basement in Los Angeles on May 29. This isn’t some dive bar: The Basement features 4 immersive escape rooms. Fun! Angie reportedly booked all four rooms for this event, including The Basement, The Elevator Shaft, The Study and the Courtyard.

Angie reportedly joined her kids in on the fun, and The Blast reports that the group made it through all of the rooms. Considering how creepy and how difficult some of The Basement’s rooms are – they’re all rated 4/5 difficulty – this is very impressive! Afterward, Angie and the kids rewarded themselves, while celebrating Shiloh’s 13th, with custom birthday cakes and watched a performance from a magician that was hired for the party. Cake, magicians, and pulling off an escape that would make Harry Houdini proud? It sounds like a perfect birthday.

Shiloh was born on May 26, 2006, the first of Brad and Angelina’s biological children. Angie would give birth to the twins, Vivienne and Knox, in 2008. Brad and Angie’s kids have proven that they don’t need shared DNA to be a family, as the kids have been super tight whenever they’ve accompanied their famous parents at red carpeted events or when running errands to the local pet shop. In the wake of Brad and Angie’s 2016 split, Shiloh has frequently been seen by her mother’s side during shopping trips and at fancy events.

Work may have kept Brad away from his daughter during her birthday, but don’t get it twisted: he loves and cares deeply for his daughter. When Shiloh and Zahara were spotted having a late night dinner with Stranger Things star Millie Bobby Brown in February, Brad had to hold back his feelings. “He’s happy that they’re making friends and having fun,” a source EXCLUSIVELY told HollywoodLife.com, “But he’s also a very protective dad, so it is hard for him to see his babies grow up.”