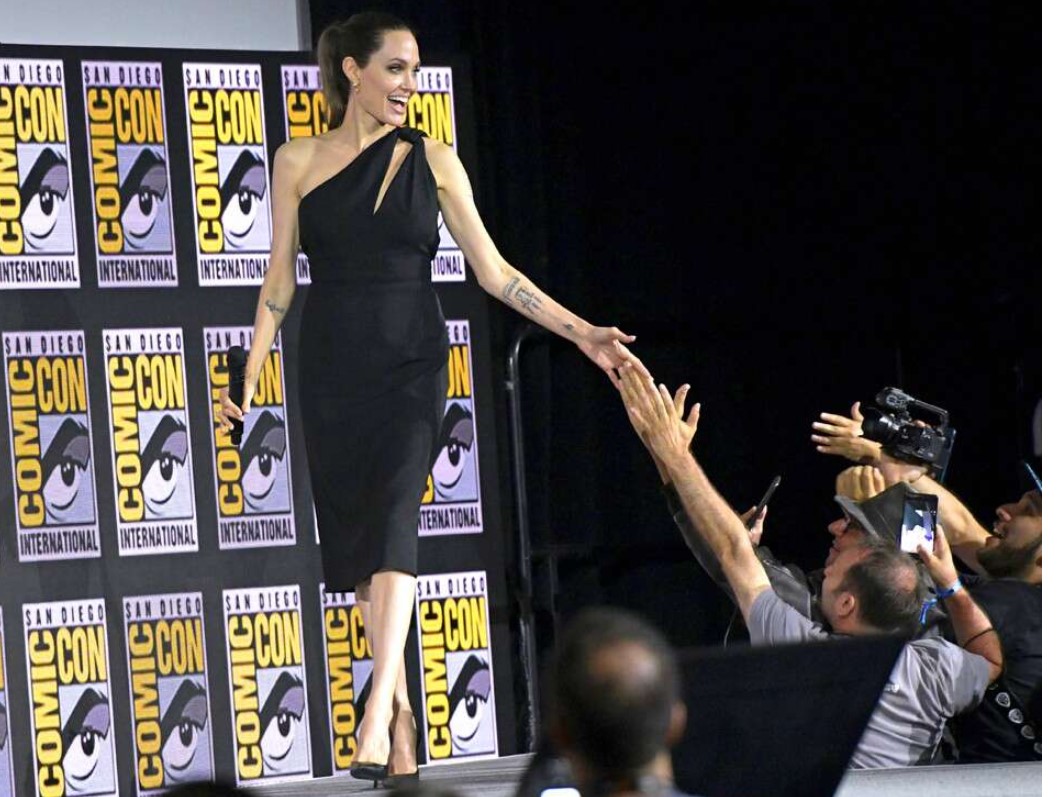 Angelina Jolie is proving she’s a superhero on and off the big screen. The legendary actress is stepping into the shoes of Maleficent once again in Disney’s upcoming sequel and will suit up to play Thena in Marvel’s Eternals film. But despite playing two of the strongest characters in movies right now, she reveals it took some time to get into that mindset.

“I’m like everybody and… especially these last few years haven’t been the easiest, and I haven’t felt very strong,” Jolie tells E! News at Disney’s D23 Expo. “There’s something when you’re not feeling very strong, where you push yourself.”

She adds, “And I’m so grateful that I have the opportunity to play these kind of characters, that pull out every bit of strength I have and that remind me that I can be strong.” The 44-year-old star says she hopes others can be reminded of their strength, too when they see her upcoming movies.

For the Maleficent: Mistress of Evil actress, she explains that when really get into your role, you pull up something in yourself that is similar [to your character].” That’s why she’s staring find her own super powers with her Marvel role, where she’ll star alongside Selma Hayek, Kit Harrington, Gemma Chan, Richard Madden and many more A-listers.

“Sometimes you really feel low and you gotta pull it back up,” she shares. “Right now, for Thena, I’m having to do so much training and she’s so positive, so healthy and she’s so aggressive that I’m often like, ‘This is not gonna work.’ But, you gotta push yourself.”

Although, she admits it helps to have her kids join in on the fun. Jolie says she and her 11-year-old son Knox Léon Jolie-Pitt do weapon and karate training together.

“Some of them have been around in doing [training],” the actress reveals. “My son Knox does some weapon [training] and karate.”

She admits that she also crashes her kids’ classes. “I’ve been jumping into all of their classes. I’m the mom that keeps trying to show up.”

But all in all, she says “it’s been fun and really good.”

When the legendary star announced her role in the Marvel Cinematic Universe at 2019 Comic Con, she told fans that she would work “10 times harder” and it seems like she’s keeping her promise.

“We know what you deserve…,” she said at the convention. “We are all gonna be working very, very hard.”

However, best believe when she’s off-duty she’ll be checking in on her son, Maddox Chivan Jolie-Pitt, whom she recently dropped off at college at Yonsei University in Seoul, South Korea.

“I’m so proud of him and he was so ready,” she tells us at the D23 Expo. “I couldn’t be more excited. Our house in Cambodia is six hours away, so I’ve got plans to… be stalking.”

She adds, “I’m gonna be one of those moms. It’s only been a few days, give me a few weeks and I might be back on a plane.”