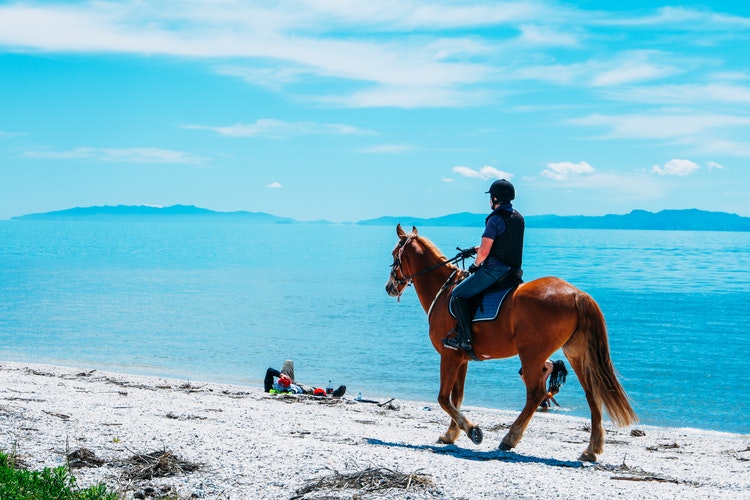 Western riding evolved from the cattle-working and warfare traditions brought to the Americas by the Spanish Conquistadors, and both equipment and riding style evolved to meet the working needs of the cowboy on ranches in the American West. Though the differences between English and Western riding appear dramatic, there are many similarities. Both styles require riders to have a solid seat, with the hips and shoulders balanced over the feet, with hands independent of the seat so as to avoid disturbing the balance of the horse and interfering with its performance.

The most noticeable feature of western style riding is in the saddle, which has a substantial tree that provides greater support to horse and rider when working long hours in the saddle. The western saddle features a prominent pommel topped by a horn (a knob used for dallying a lariat after roping an animal), a deep seat and a high cantle. The stirrups are wider and the saddle has rings and ties that allow objects to be attached to the saddle.

Western horses are asked to perform with a loose rein, controlled by one hand. The standard western bridle lacks a noseband and usually consists of a single set of reins attached to a curb bit that has somewhat longer and looser shanks than the curb of an English Weymouth bridle or a pelham bit. Two styles of Western reins developed: The long split reins of the Texas tradition, which are completely separated, or the closed-end “Romal” reins of the California tradition, which have a long single attachment on the ends that can be used as a quirt. Modern rodeo competitors in timed events sometimes use a closed rein without a romal.

Western riders wear a long-sleeved shirt, denim jeans, boots, and a wide-brimmed cowboy hat. Cowboy boots, which have pointed toes and higher heels than a traditional riding boot, are designed to prevent the rider’s foot from slipping through the stirrup during a fall, preventing the rider from being dragged—most western saddles have no safety bars for the leathers or automatic stirrup release mechanism. A rider may wear protective leather leggings called chaps. Clean, well-fitting work clothing is the usual outfit seen in rodeo, cutting and reining competitions, especially for men, though sometimes both men and women wear brighter colors or finer fabrics for competition than for work.

Show events such as Western pleasure use much flashier equipment, unlike the English traditions where clothing and tack is quiet and unobtrusive. Saddles, bits and bridles are ornamented with substantial amounts of silver. The rider may add a jacket or vest, and women’s clothing in particular features vivid colors and even rhinestones or sequins.

Western horses are asked to have a brisk, ground-covering walk, but a slow, relaxed jog trot that allows the rider to sit the saddle and not post. The Western version of the canter is called a lope and while collected and balanced, is expected to be slow and relaxed. Working western horses seldom use a sustained hand gallop, but must be able to accelerate quickly to high speed when chasing cattle or competing in rodeo speed events, must be able to stop quickly from a dead run and “turn on a dime.”