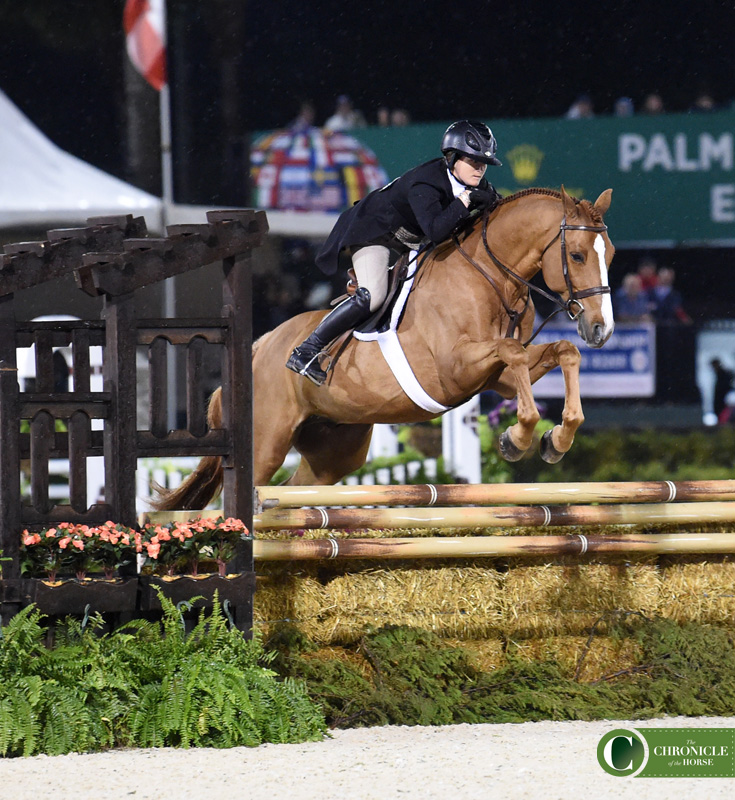 The annual $100,000 WCHR Peter Wetherill Palm Beach Hunter Spectacular is always a mixed bag of competitors. There are the veteran partnerships who have ribboned at all of the top shows throughout the country, amateurs and juniors competing in their first feature class, and then there are the pairings that just get together for one class.

As usual, it was an exciting evening at the Winter Equestrian Festival, and Tori Colvin once again proved just why she’s so good. With Brad Wolf’s Private Practice she led the class from start to finish on a score of 182.16. This marks her second consecutive win with the 10-year-old Holsteiner by Lordanos and her sixth lifetime win in the class.

In stark contrast to Colvin, second-placed Katie Taylor didn’t have the luxury of a longtime partnership with her mount Kindred. The California-based rider earned a ticket to tonight’s class as the reserve champion in last year’s WCHR West Coast Spectacular (California), but instead of shipping a horse all the way to Florida for one class, she went hunting for a ride here.

She had a couple of different options but ultimately decided to ride Gabrielle Sokolow’s 8-year-old warmblood after a good test run this morning.

“It’s pretty amazing; I got the email a few months ago that I was going to be able to come out here, and I’ve always wanted to come out and do this,” said Taylor. “I ride with David Bustillos of Durango Farms back home, and we were going to send my horse out here to do the class, but it was a lot to send him out here just for this class. Liz Reilly of Makoto Farms put me on this horse this morning, and I loved everything about him, so I got to show him today.

“I jumped 10 single jumps this morning to feel him out and I was a little unsure about the stride, but everyone who has ridden him has given me a lot of pointers and I felt connected with him immediately. His rhythm is amazing.”

“I was really pleased with him,” said Stewart. “I haven’t shown him since the National Horse Show [Kentucky] and then I gave him a month off. I had to get him fit again, and he was great all week long. His best round was this final round. He’s always dependable and still fairly young so I’m excited to have him.”

The Chronicle is on-site at the Winter Equestrian Festival covering the highlights from World Championship Hunter Rider week. Don’t forget to pick up a copy of the March 9 issue for more in-depth analysis.