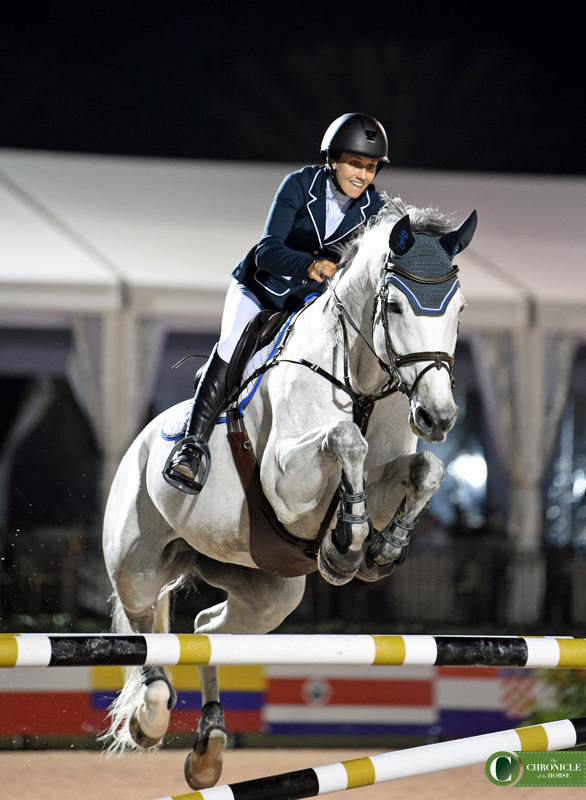 Cornacchia’s Valentine Gives Her An Unforgettable Anniversary Gift At WEF

In a way she did.

In only her second week competing in the international classes at WEF, the 30-year-old Canadian rider took second behind Jessica Springsteen and Volage Du Val Henry with her mare Valkyrie De Talma. The evening was made even more special by the fact that Valentine’s Day marked Cornacchia’s three-year anniversary with “Val.”

“I jumped my very first 1.40-meter junior/amateur class on her three years ago,” said Cornacchia. “Now we’re at this point, and it’s pretty exciting. She has a lot of heart; she’s a super talented mare, and I feel incredibly lucky to have the ride on her.”

Scott Smith first spotted the Selle Francais (Diamant De Semilly—Reggae De Talma, Cento) as a 7-year-old and suggested her to Cornacchia and her trainer Jim Ifko. They watched her for about a year before Cornacchia purchased the mare.

Now 11, Val has brought Cornacchia farther than she could’ve ever imagined.

“She’s pretty funny,” she said. “She’s a little bit of a firecracker sometimes when she wants to be. She’s extremely food motivated. Loves any kind of food, anything. She’s really quirky and funny that way, but in the ring, she’s all power, all heart. She’s super intelligent, just gets and knows the sport.

“Sometimes I think mostly I just try to stay out of her way,” she continued. “If I don’t get in her way she’s going to do amazing.”

Cornacchia started riding as a teenager, but never took it too seriously until she got Val. Now she runs Eventyre Farm with Ifko and has even dabbled in breeding.

“There’s not a lot of big breeding outlets in North America, and we thought why not try to bring some of these top bloodlines to North America without having to go to Europe? So that’s what we’ve been trying to do,” she said. “We have a really good stallion who my trainer rode—Un Diamant De Florets, who’s [by] Diamant De Semilly, which is one of the top stallions in the world right now. And I really enjoy it. I just really love the whole process.”

Most of the horses they’ve bred will be sales horses, but Ifko and Cornacchia hope that one might be their next superstar. While they haven’t bred Val yet, Cornacchia hopes to do so in the future.

“She’s been so amazing competing and stuff, so we’ll wait until that slows down a little bit and maybe give it a try,” Cornacchia said. “But she has a few offspring in France; so far, they look incredible too, so there’s high hopes for what we can do with her as well.”

The Chronicle is on-site at the Winter Equestrian Festival covering the highlights from World Championship Hunter Rider week. Don’t forget to pick up a copy of the March 9 issue for more in-depth analysis.