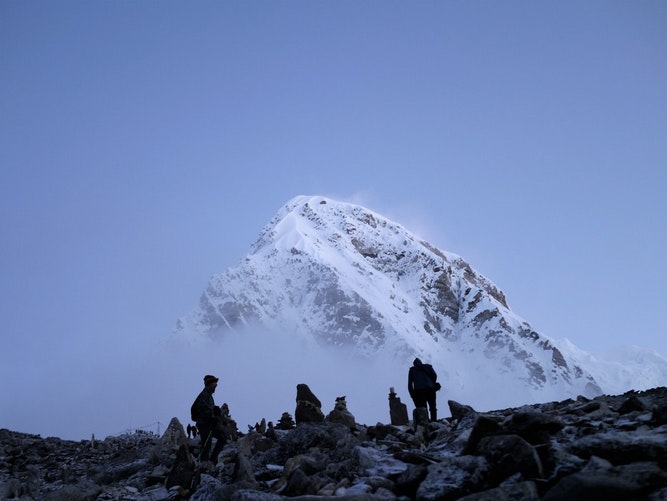 Tons of trash removed from Everest as cleanup unearths bodies

Decades of climbing on the world’s highest mountain have turned it into a very tall garbage dump, strewn with rubbish, human waste and even bodies. But a dedicated — and impressively fit — team of volunteers are tackling the problem by carrying out one of the world’s most ambitious clean-ups, and it’s seeing immediate results. Three metric tons (6,613 pounds) of garbage have been collected from the mountain in just the first two weeks of the scheme, according to AFP. That’s about the weight of two SUVs, or a large male hippo.

The task is being carried out by a 14-member team, which has been set the task of recovering 10 metric tons within 45 days, the agency reported. Waste recovered on the Everest Cleaning Campaign includes empty cans, bottles, plastic and discarded climbing gear. An army helicopter has assisted in removing the garbage, and the team is set to ascend to higher camps to collect more. Four bodies have also been located on the 8,848-meter (29,028 feet) mountain, officials said.

“Our team has now reached the Everest Base Camp for the cleaning campaign. All the necessary things including food, water and shelter have already been arranged there,” Dandu Raj Ghimire, director general of Nepal’s Tourism Department, told reporters on Sunday, according to The Himalayan Times. The Nepalese government and local communities have long been wrestling with the problem of waste on the mountain, as climbers from across the world travel to the country every year to attempt to ascend its summit.

Since 2011, regular efforts have been made to recover several tons of trash from the mountain, and waste management systems have been introduced. According to the Everest Summiteers Association, the enormous increase in visitors in recent decades has had a severe impact on the mountain’s sensitive environment. The government also introduced a deposit for climbers in 2014, which is returned if they come back to the mountain’s base with eight kilograms of trash.

In February, China banned non-climbers from its side of the mountain in an effort to reduce waste. But those in charge of the cleanup have another problem to deal with: climate change, which is melting snow on the mountain quicker and exposing an increasing number of dead bodies. “Due to the impact of climate change and global warming, snow and glaciers are fast melting and dead bodies are increasingly being exposed and discovered by climbers,” Ang Tshering Sherpa, former president of Nepal Mountaineering Association, told CNN in March. More than 200 mountaineers have died on the peak since 1922, when the first climbers’ deaths on Everest were recorded. The majority of bodies are believed to have remained buried under glaciers or snow.