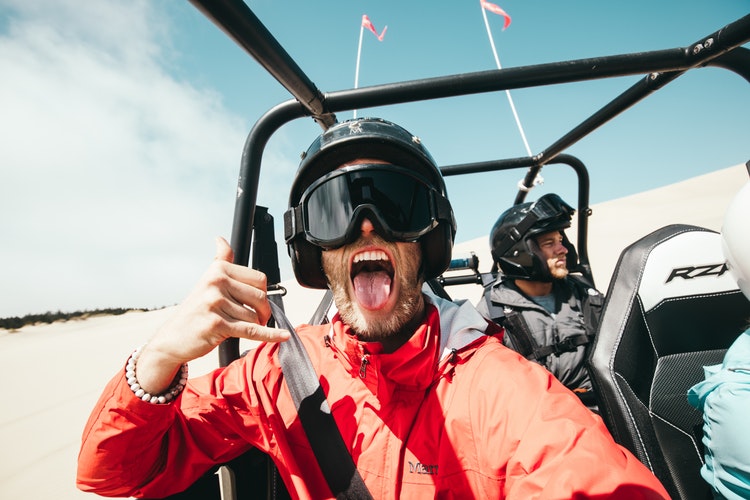 That Selfie May Be Epic, But Not Worth Your Life

The bison seemed to be paying no attention to Brandi Burgess. On a family vacation to Yellowstone National Park in 2015, Burgess figured the 2,000-pound behemoth was docile, uninterested in humans, and far enough away to safely take a selfie with her daughter with the beast in the background. She raised the phone. Then the largest land mammal in North America began to charge.

“As we’re taking the picture, this man at the edge of the parking lot hollers out, ‘You guys are too close! It’s starting to move,'” says Burgess, 47, a manager at a manufacturing plant in Flora, MS. She heard the thudding of hoofs and started to run.

“I made it probably three steps running before he got me. I was airborne,” she says. “When I hit the ground all I could think was, ‘He’s going to trample me. It’s over. It’s a wrap.'”

Her father jumped on her and after about a minute of staring, the bison wandered off. Fortunately, the bison’s horn was missing the sharp tip, so what could have been a life-ending puncture wound was a massive bruise instead. The situation went from normal to life-threatening in the few seconds it took to take the selfie, in which you can see the bison charging the unsuspecting Burgess and her daughter.

“We weren’t intending on going near him. It seemed like a good photo opportunity, which in hindsight I would not do again because I was fortunate, very fortunate,” she says.

“This is going to sound terrible, but it wound up being an epic selfie.”

Selfie Deaths on the Rise

Many others in pursuit of the “epic selfie” haven’t been so lucky. In 2019, there have been numerous incidents. Two schoolgirls in Russia fell to their deaths taking selfies. Three teens in India were killed by a train. A college student in Arkansas fell off a cliff while taking a selfie.

A recent study found there were 259 deaths and 137 injuries or accidents around the world between 2011 and 2017, from just three deaths in 2011 to 93 in 2017. Falls from cliffs, car crashes, animal attacks, drownings, firearms accidents — all are among the myriad ways people have been killed or hurt taking selfies. Males accounted for three-quarters of selfie deaths. Half of all victims were in the 20-29 age group, and 36% were 10-19 years old. Nearly half occurred in India, followed by Russia and the United States.

Drownings, train strikes, and falls were the most common causes of death — a moment of distraction, of not being aware of one’s surroundings that proved fatal. And the study’s authors noted that since selfies are not recorded as the official cause of death, the true number is likely much higher. Such revelations have led to an increase in calls for picture takers to exercise more caution and the establishment of “no-selfie zones” in places like lakes, scenic overlooks, and national parks. But with an estimated 24 billion selfies taken a year, that’s a lot of minds to change.

Wrote the authors of the study, “Selfies are themselves not harmful, but the human behavior that accompanies selfies is dangerous. Individuals need to be educated regarding certain risky behaviors and risky places where selfies should not be taken.”

Why, then, are people motivated to climb onto slippery ledges or go too near dangerous animals in pursuit of a photo? John Grohol, PsyD, a psychologist in Newburyport, MA, and founder of website Psych Central, says it is no coincidence that the rise of selfie deaths coincided with the popularity of social media platforms like Facebook, Instagram, and Twitter.

“It’s psychological reinforcement for people to receive more likes. It tells them that other people are finding the photo engaging and interesting. … It’s a little psychological pat on the head that tells you, ‘Hey, you’re doing a good job. Keep it up if you want to continue to be liked by people,'” he says. The danger comes when people feel the need to keep one-upping themselves to show the fantastic places they visit and the amazing things they do, to equal or top how popular the last photo was.

“It’s so easy to be distracted by what it is you’re doing on the phone. You’re forgetting, ‘I need to hold on with my other hand’ and suddenly you’re like, ‘Oh I need to swipe.'”

Another factor, he says, is that people might have spent hours hiking to a location. They’ve based their day around getting there. How many will turn around without getting the photo because of the risk of a fall?

“You already have all these costs you’ve put into trying to get to that point of taking the selfie, so your mind is not looking at the situation objectively at that point. It’s thinking, ‘I can’t just turn back. I’ve already done all these other things to get to this point, so turning back doesn’t seem like a reasonable option,'” he says.

There is a growing body of research into what some have called “selfitis,” or obsessive selfie taking. In one study of students in India, researchers isolated the three traits that lead people to “chronic selfitis”: attention-seeking, environmental enhancement (making a better memory of where they are visiting or what they are doing), and social competition.

“The results suggest that people with chronic levels of ‘selfitis’ are seeking to fit in with those around them, and may display symptoms similar to other potentially addictive behaviors,” wrote co-author Mark Griffiths, PhD, professor of psychology at Nottingham Trent University.

Griffiths says “selfitis” is a made-up term with no clinical definition. “Our research simply looked at whether excessive selfie-taking existed, and we came to the conclusion that it appears to.”

In regards to the physical danger of selfies, he says, “For the overwhelming majority, selfies are life-affirming and life-enhancing with no negative downsides whatsoever.”

“Most of us do it in a reasonable way. We don’t have our self-worth or social lives revolve around the selfie, but for some people it can become a very dangerous game they’re playing, with social media, with the idea of popularity. It all plays into their own idea of self-worth and sense of self-esteem, and I would argue that obviously no photograph is worth dying for. I don’t care what it does for your self-worth. If it puts your life at risk, I don’t think that’s a very good trade-off and doesn’t make much sense.”

Deepak Gandhi was driving in Mumbai, India, on a narrow road with practically no shoulder, a road that sees lots of high-speed traffic, when he saw two bicyclists pedaling with selfie sticks out.

“On that narrow road, the selfie stick might hit other bikers who are passing by and one skid on that road won’t be anything less than fatal. Like anyone else even I too was shocked when I saw this and decided to do something about it,” he says, writing from Qatar, where he lives now.

He decided to launch SelfieToDieFor.org to educate people on the dangers of selfies and encourage visitors to take a safe-selfie pledge.

“Selfies are fun! Let them be that way and not be a cause for mourning. There is a thin line which we all know about, and the repercussions if we cross that line,” he says

There is a global effort to rein in selfie takers. In Mumbai, 16 areas have been declared “no-selfie zones.” In Indonesia, officials developed a “safe selfie spot” at the top of Mount Merapi. The smartphone app Saftie lets users share dangerous selfie locations and informs users when they are near such a place.

Wrote the authors of the study on selfie deaths, “‘No-selfie zones’ areas should be declared across many tourist areas, especially places such as water bodies, mountain peaks, and over tall buildings to decrease the incidence of selfie-related deaths.”

“No-selfie zones” haven’t been attempted much in the U.S. — if at all. But at Yellowstone National Park, officials have increased visitor education regarding bison. Burgess, the Mississippi woman, was one of five people attacked by bison in 2015. The park now discourages — but doesn’t prohibit — bison selfies.

“Yellowstone National Park has many warning signs about dangerous animals and regulations about how close to view wildlife. However, it is these visual cues of people taking selfies and not getting hurt that are sending mixed messages about the real dangers of bison,” wrote the National Park Service in a report on the 2015 incidents. “Although these bison selfies might seem normal, there is a very real possibility that a bison-related injury could happen to you. So practice phrases such as ‘give them room, use your zoom’ and stay back at least 25 feet for bison.”

Other national parks have seen selfie-related tragedies. Last year, a couple fell to their deaths in Yosemite taking a selfie, while in March of this year a tourist taking a selfie tripped and fell 1,000 feet and died at the Grand Canyon, prompting the National Park Service to declare a “Safe Park Selfie Day.”

For her part, Burgess’s close encounter with the bison changed her outlook on selfies.

“They look so docile because they are so large and still. Holy cannoli — he charged me just like that and could have very easily killed me,” she says.

She vowed to never again take a selfie with wildlife.

“I do think people are extremely reckless,” she said of some selfie-takers. “I felt like a terrible mother after it. I put my child in danger, my only child. I felt horribly irresponsible.”