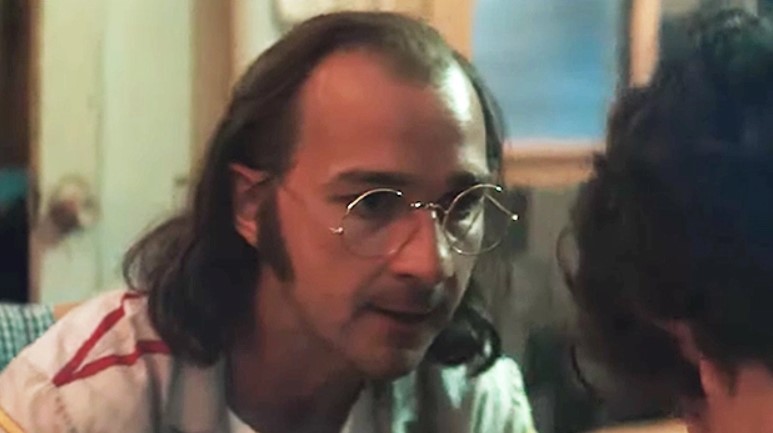 We had to do a double take while watching the first trailer for Shia LaBeouf‘s semi-autobiographical film Honey Boy. In the film, Shia, 33, plays a version of his own father, Jeffery LaBeouf, and the two men couldn’t look any different. To step into the role of his father, the actor wore a wig that made him look like he simultaneously had long hair and was balding — a la Murray from Stranger Things –as well as round eyeglasses and dirty clothes. This isn’t the Shia we’re used to seeing, and it’s clear from the trailer that this film is going to be spectacular. You can see a photo of Shia in character below, and watch him in the above Honey Boy trailer.

Lucas Hedges steps into the role of actual Shia (called Otis Jort in the film) at the age of 22. And the adorable Noah Jupe, who plays one of John Krasinski and Emily Blunt‘s sons in A Quiet Place, plays Shia/Otis at age 12. The film also stars FKA Twigs, Shia’s real life girlfriend. Shia and the “Two Weeks” singer, 31, were spotted leaving her London home in September 2018, shortly after Shia’s divorce from actress Mia Goth. Asked for comment on their relationship, FKA simply told Daily Mail that, “We’re very happy, we’re having a nice time.” Ever since, they’ve shared some adorable PDA and are going strong.

Honey Boy tackles Shia/Otis’ complicated relationship with his father as he becomes a child star, harkening back to Shia’s days on Disney Channel’s Even Stevens. The older version of Otis is an addict who eventually seeks help in rehab while still dealing with his father. Shia actually wrote Honey Boy during a stay in rehab. ”It’s strange to, like, fetishize your pain and make product out of it and feel guilty about that,” Shia told our sister site, Indiewire, at the 2019 Sundance Film Festival. “Because it felt very selfish, this whole thing felt very selfish. I never went into this thinking, ‘let me f**king help people,’ that wasn’t my goal. I was falling apart.”