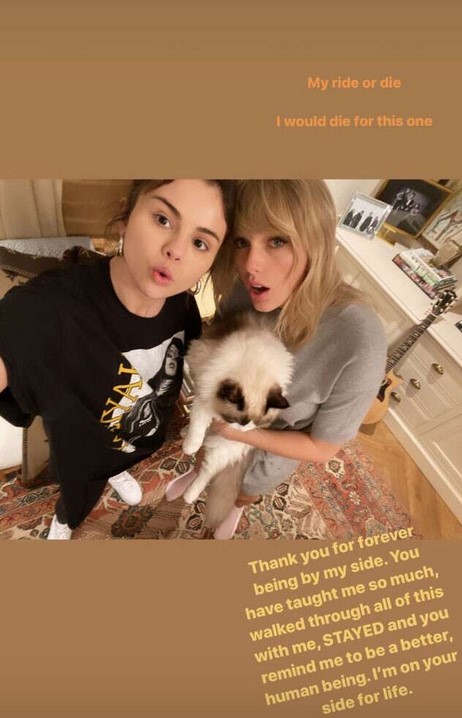 On Wednesday, Oct. 23, when Selena finally dropped a new single—following a 4-year hiatus from her last album—people quickly began speculating that Hailey Bieber was throwing shade at her husband Justin Bieber’s ex.

Where would they get this idea from, you ask? Shortly after the release of Selena’s new track, “Lose You to Love Me,” Hailey posted a song she was listening to on her Instagram Story. The song in question was “I’ll Kill You” by Summer Walker and well, people quickly began forming their own theories and thoughts on what that could possibly mean.

Soon thereafter, Selena also took to social media to address the alleged “shade” telling her fans that she will never stand for “women tearing other women down” and urged for her fans to “please be kind to everyone.”

Now, the “Look At Her Now” is catching flak from Taylor Swift fans after Selena posted a mirror selfie on her Instagram Story of herself modeling Kim Kardashian’s new shapewear SKIMS. “Legit, so freaking comfortable,” Selena wrote on her selfie, tagging the SKIMS brand.

In case you forgot, Taylor and the KUWTK star and her husbandKanye West don’t have the most amicable track record (however, earlier this year, Kim seemingly moved on from the drama). Consequently, Taylor fans took to social media to share their criticism.

But after the alleged harassment from Taylor fans, Selena deleted the photo of herself wearing SKIMS and then posted a selfie of herself with the “You Need to Calm Down” singer.

“My ride or die, I would die for this one,” Selena wrote alongside a selfie of she and Taylor. “Thank you for forever being by my side. You have taught me so much, walked through all of this with me, STAYED and you remind me to be a better human being. I’m on your side for life.”

It looks like Selena definitely read the backlash she was getting but needed to make it clear that her post didn’t mean she didn’t have her BFF’s back. In a recent interview with Zane Lowe for his Apple Music Beats 1 show, “New Music Daily,” Taylor gushed about her longtime gal pal.

“I’m so proud of her. She’s been through so much. I’ve watched so much happen in her life,” Taylor told Lowe of Gomez. “She is such a revelation because now she’s making her best stuff.”

In a separate interview with Lowe, Selena heard audio of Taylor’s comments about her and became emotional.

“[Taylor has been an] amazing [friend]. For sure. She was frustrated when I was frustrated. She was sad when I was sad. But more than anything, my friends stood by my side. I think they visibly saw me in so much pain and they didn’t want it for me, but they,” Selena said, according to Elle, with tears. “They never stopped loving me. And I played her the song, and I played it with her mom and dad and I showed her the video and her mom and Taylor started crying.”