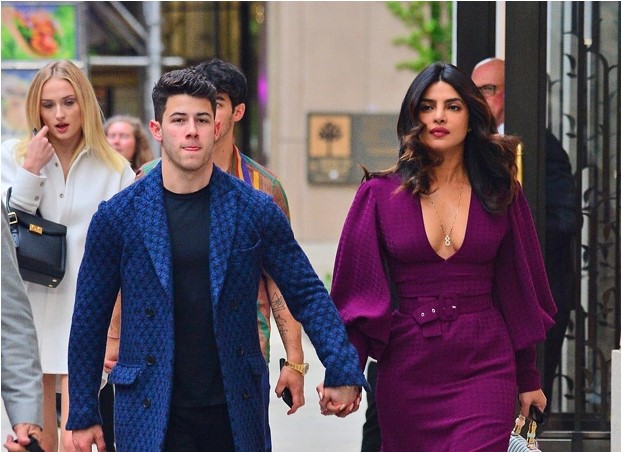 Priyanka Chopra, 36, and Nick Jonas, 26, have a new married couple to go on double dates with: Joe Jonas, 29, and Sophie Turner, 23. In their first group outing in public since Joe and Sophie’s Las Vegas wedding on May 1, the foursome was pictured on the streets of New York City on May 10. It appears the 2019 Met Gala’s “Camp” theme has rubbed off on them, because Priyanka, Nick and Joe were still sporting bright colors and interesting patterns. But it was Pri who especially caught our eye!

The Bollywood starlet hit NYC’S streets in an eggplant purple dress, cinched at the waist by a belt. The dress featured a trend on the rise — bubble sleeves — and a plunging neckline that allowed Priyanka’s gold necklace to really pop. But her best accessory was her husband, whom she sweetly held hands with during the double date.

The navy blue on Nick’s textured coat was the perfect complement to Priyanka’s purple, and we saw them nail the same outfit symmetry at the Met Gala on May 6. They coordinated in Dior and were a silver dream. Priyanka’s Dior Haute Couture gown was even topped off with a silver crown, while Nick wore the same color on his necktie and glittery dress shoes. Sophie and Joe were also invited, and they opted for sequins and avante-garde patterns from Louis Vuitton. For both couples, it was their first Met Gala as married units.

Priyanka has a thing for purple, as it was the same color she rocked on a jumpsuit for an interview with Access on May 8. During the on-air chat, the Quantico actress revealed her clever pet name for her in-laws — “Jophie” — and reminisced on helping Sophie and Joe tie the knot right after the 2019 Billboard Music Awards. “It was really funny. We were at the Billboards. Joe, I think, had this idea that he wanted to do this. He had these little black cards that we all got,” Priyanka said. “We were randomly inviting our friends, like people that we met.”