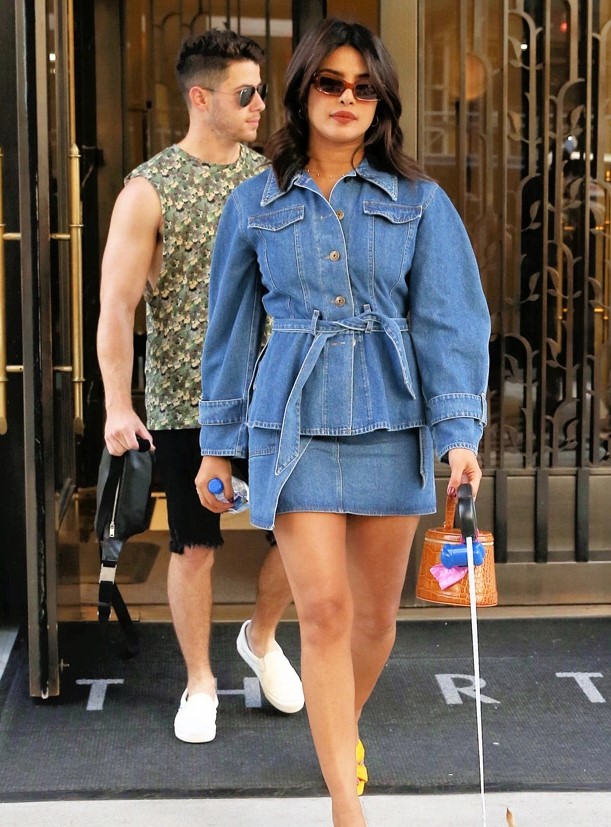 Priyanka Chopra, 37, proved she can rock basically anything and look good in it when she left the Four Seasons Hotel in a double denim outfit on Aug. 31! The actress showed off a long-sleeved denim button-down shirt and matching mini skirt when she took her dog for a walk with hubby Nick Jonas, 26, in New York City and her look definitely turned heads! Nick also got attention with his own wardrobe choice, which consisted of a camouflage muscle shirt and black shorts, during the outing. The lovebirds also wore shades to keep the sun at bay and Priyanka topped off her look with bright yellow heeled sandals while Nick wore white sneakers.

Priyanka and Nick’s latest sighting comes after they wowed while out in NYC with their two-year-old  niece, Valentina, the daughter of Kevin & Danielle Jonas. The good-looking couple also chose flattering wardrobe choices for that outing as well, including a green checkered dress for Pri and a light blue button-down shirt and dark gray pants for Nick. They again were seen leaving the Four Seasons Hotel at that time and were all smiles while they lifted Valentina up by her hands. At one point, Priyanka and Nick were seen alone as they held each other’s hands too.

The cute husband and wife have been enjoying a family vacation in New York and from the looks of their outings, they seem to be having an incredible time! In addition to his downtime with Priyanka, Nick performed with his brothers for the Jonas Brothers concert at Madison Square Garden on Aug. 29 and Aug. 30. The show was part of their Happiness Begins tour and they certainly left a lasting impression for their fans!

We can’t wait to see more fun outings with Priyanka and Nick in the future! We’re sure they’ll impress us again with their style and love!