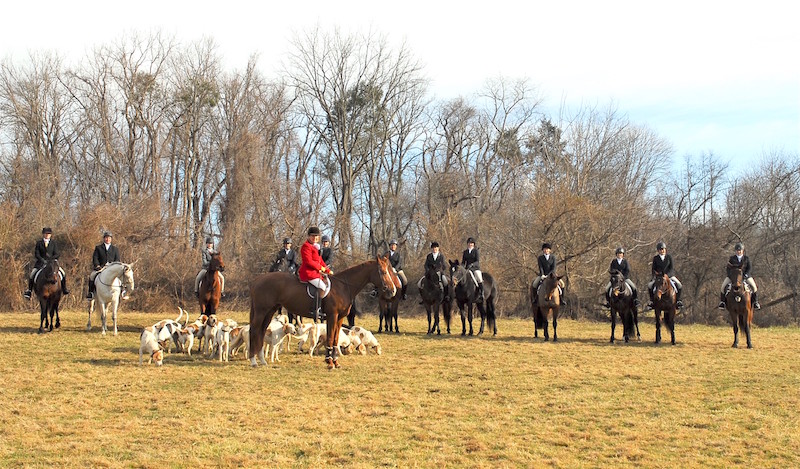 Off-Track Standardbreds Get Their Day In The Field

It’s not unusual to see off-track Thoroughbreds in the hunt field, but Monmouth County Hunt (New Jersey) recently welcomed a slightly different group of former racers. The club held a Standardbred Hunt Day on Feb. 2 that attracted trotters and pacers from three states. Participants included first-time foxhunters as well as a few Monmouth County members who regularly hunt their retired “Standies,” as the breed is affectionately known.

“The part of the state where our kennels are is a beautiful part of New Jersey horse country,” said Jennifer Donaldson, MFH, “but all the farms are primarily Standardbreds. We decided to do this Standardbred hunt day as a way to get them out hunting, because the breed takes so well to it, and sometimes the owners are looking for a new discipline for these horses.”

This was the first time the hunt has specifically invited Standardbreds to a meet. The idea came from one of their members, Sam Landy, an owner/trainer and off-track Standardbred rider himself. “He brought the idea to [the masters],” said Donaldson, “so we picked a date and started to promote it.”

One of the ex-racers was Hugme Christi, a 19-year-old mare owned by Karyn Malinowski, a professor at Rutgers University. Hugme Christi raced for nine years, earning over $120,000 from a total of 258 starts.

Malinowski, the founding director of Rutgers’ Equine Science Center, became interested in owning Standardbreds after being impressed with the calm temperaments and durability of the horses in her research herd.

“That was my midlife crisis, driving Standardbreds!” she said with a laugh. “We have a research herd of about 30 Standardbreds here on campus, and I was doing some research on old horses here in the equine exercise phys lab

“I had a trotter that was loaned to us. She was 30 years old, and she would never break into a canter or gallop on the treadmill—she race-trotted on that treadmill at 30 miles per hour!” Malinowski continued. “I have so much respect for these horses and this breed. I said, ‘You know what? I’m gonna learn to drive one of these things.’ ”

Malinowski explained that a new driver’s competence is evaluated by several judges at the track over a period of time before being granted a [provisional] license. Demonstrating safety and skill through increasing numbers of starts will earn an amateur and ultimately a professional license.

Hugme Christi (Dream Away–Hug Me If You Love Me) had been diagnosed with EPM before Malinowski acquired her, but she responded well to treatment and went on to have a terrific career, often with Malinowski holding the reins. “We had so much fun with the mare,” she said. “The second-best night of my life was winning the [2005] Amateur Final at the Meadowlands [New Jersey] in the fastest time ever for that amateur club and the second-fastest time ever for a woman driving a pacer at the Meadowlands.

“I will never forget that night; we won by 10 lengths going away!” she added. “She’s something else.”

Area trainer Wendy Hale rode Hugme Christi at the meet. Hale has held a professional driver’s license for three decades and helped Malinowski find Hugme Christi. “Hugme Christi has only been out on a couple of hunts, but she gets it after the first 20 minutes,” she said. “So that makes it pretty fun.”

Hale has worked with off-track Thoroughbreds and Standardbreds. “I think it’s easier to break a Standardbred to be a pleasure horse than it is to break a Thoroughbred, because it’s totally different,” she said. “The Standardbreds don’t associate being ridden with racing. Most of them, honestly, it’s put the saddle on and go. After that, you’ve already got walking, trotting and all the steering. So for the most part, they’re pretty easy to take out onto the trail.”

Hale volunteered for decades with local 4-H groups and said that Hugme Christi’s temperament made her a trustworthy choice for youngsters learning to drive. “She’s perfect, she doesn’t do anything wrong,” she said.

“I can’t tell you how many 4-H kids came out and drove Hugme Christi or went out in a two-seater cart with her and Karyn,” Hale continued. “Just about anybody who wanted to experience harness driving would come out and sit behind her, and this was while she was a so-called ‘wild’ race horse. So a lot of people have an experience driving because of this horse.”

Malinowski also praises the breed’s steady temperament, which makes them suitable for her research and teaching work. “We worked with nine of them yesterday,” she said. “They’ll let you do what you want to do. They’re sensible. They’re strong.”

Her research program uses Standardbreds for several reasons, including maintaining a known genetic pool. “We decided more than 30 years ago we were going to go with Standardbreds because of their availability and their quietness and their ability to be working with students who have no horse experience, which most of our students do not have,” she said.

Malinowski, whose areas of research include the effects of aging and stress in performance horses, notes that Standardbreds suffer far fewer catastrophic breakdowns than Thoroughbreds. She attributes this to several factors, including the two-beat gait that avoids excessive stress on just one leg, the fact that there is less weight on the horse’s back, and the greater bone of the Standardbred

Fitness is a factor also: Malinowski recalls exercising one trotter who was regularly jogged 10 miles a day four days a week, trained [worked at a faster pace] one day, and raced one day. “They’re wonderful; they live a long life,” she said. “And in the 30 years that I have worked with Standardbreds, I have never seen one crib, ever.”

This wasn’t the first time Monmouth County Hunt has welcomed new riders from their community. The club also hosted a Rutgers day, when current students and faculty at the university as well as alumni were given a special invitation to join the hunt. The club’s hunter pace awards are also affiliated with the Jockey Club’s Thoroughbred Incentive Program.

“The Standardbred people as a whole are all really excited to try something new and now can add foxhunting to their horses’ resumes,” Donaldson said. “The reception has been great.”