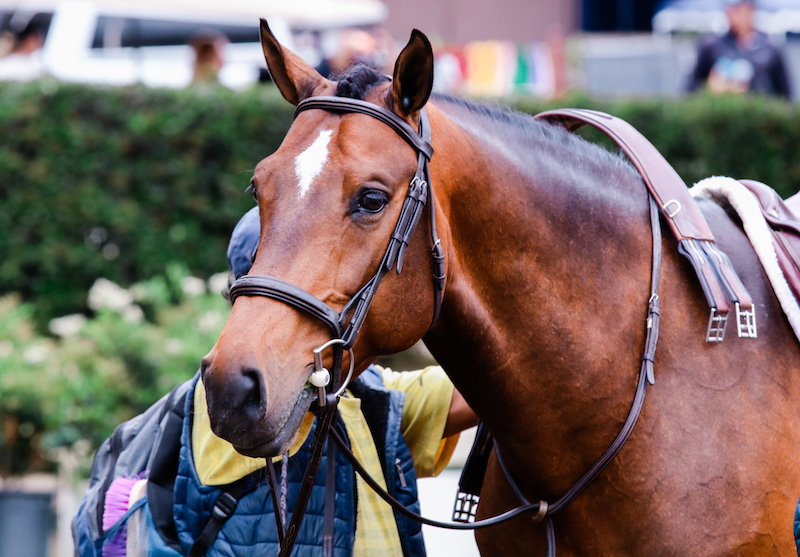 Behind the Stall Door With: MTM Outbid

MTM Outbid soared to the top of the leaderboard on Feb. 7 at the Desert International Horse Park in Thermal, California, winning the $50,000 USHJA International Derby with professional rider Jamie Taylor in the irons.

The 10-year-old Holsteiner gelding is no stranger to the derby field, with multiple big wins in the last three years. With rider Tracy Fenney, “Outbid” won his first derby championship at HITS-on-the-Hudson V (New York) in July of 2017. Then he did it again at Showplace Spring Spectacular III (Illinois) in June of 2018 and again in March of 2019 at the Ocala Championship Show (Florida). Outbid also jumped his way to a top-10 finish at Platinum Performance USHJA International Hunter Derby Championship (Kentucky) in August 2018 and the reserve championship in the Diamond Mills $500,000 Hunter Prix Final at HITS-on-the-Hudson in September 2018.

While Outbid holds superstar status on the East Coast and in Texas, in June of 2019 his name started popping up on derby entry lists in California. We went behind the stall door to get the story on the handsome bay’s new situation.

“We flew to MTM Farms [in Flower Mound, Texas,] last summer to try a different horse as a potential junior hunter for my client Ariana Marnell,” said trainer Denise Finch of Hunter’s Edge in Las Vegas. “Outbid was in the crossties, and Ariana asked to ride him even though he wasn’t for sale. The two made an instant connection, and I just knew that they would make a great pair. Then it just kind of happened from there.”

Outbid has been at his new home for about nine months now, and his whole barn family is head over heels for him.

“It’s really cute actually,” said Finch. “He takes his time with new people but then once he’s comfortable he loves to snuggle, and he has a really outgoing personality once he lets you into his circle.”

But after allergy testing and lots of experimentation, they found he was allergic to timothy hay and rice bran. Once they eliminated those foods from his diet, the twitch is much less noticeable.