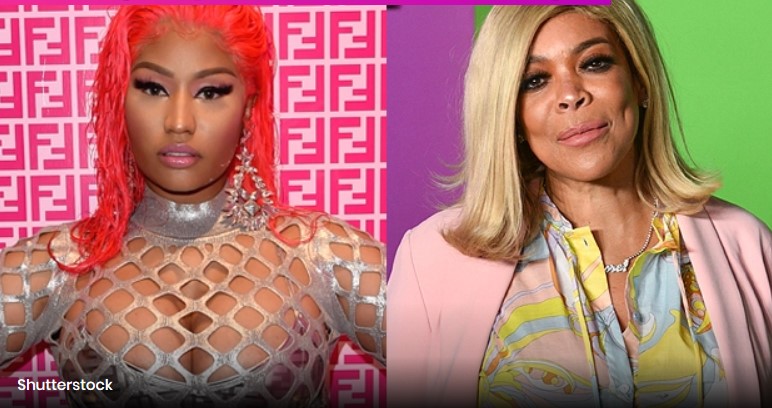 Nicki Minaj’s once supportive relationship with Wendy Williams, 55, has been flipped upside down. On the Nov. 1 episode of Queen Radio, the rapper was seething after Wendy mocked her marriage with high school sweetheart Kenneth “Zoo” Petty, 41, whom Nicki just tied the knot with in a secret ceremony on Oct. 21. “Now, he served seven years in prison and he’s also a sex offender. So that means that he…is a manslaughter a killer? Okay. So, he’s a killer and a sex offender… Well Nicki, congratulations,” Wendy said two days later on her talk show, referring to Kenneth’s criminal past — he has served time for attempted rape and, later, first degree manslaughter in connection to the shooting death of Lamont Robinson. Now that Nicki had the stand, she threw the shade right back at Wendy and took aim at a sensitive subject: Wendy’s failed marriage with Kevin Hunter, which was surrounded by rumors that he was allegedly entertaining a mistress, Sharina Hudson, during the marriage.

“How can you interview a bunch of rappers, where all they talk about is shooting and killing, then continue to mention somebody who actually did that, who did their time and paid their debts to society, that’s why Kevin was on that island chilling. Kevin said wait a minute, I’m about to have my baby, I’m not about to come to that episode my real b***h about to give birth,” Nicki said on Friday’s episode of Queen Radio — and she was just getting started. Kevin’s alleged mistress reportedly gave birth to a baby boy in March 2019, according to Page Six (the father wasn’t identified) — that same month, photos of the pair vacationing in a tropical location surfaced online. By April 2019, Wendy filed for divorce.

“B***H WHERE WAS YOU AT WHEN KEVIN HAD HIS D**K IN THAT B**CH PUNANI? And it’s not about you doing your job, there are people who do it with an evil heart and I pray for you because I know you’re sick and humiliated,” Nicki continued, sparing no mercy. She then defended her new husband, adding, “I pray for you. I let it go when you have to tell the audience, whatever, he had to do time for. I let it go. But every time you mention him you feel the need to bring these things up as well as something that he was wrongfully accused of doing when he was 15 years old or because he didn’t have $7k to bail yourself out.” After Kenneth was convicted of first degree attempted rape, he was sentenced to between 18-54 months of prison time, in connection to an incident that happened between him and a girl when they were both 16 years old in 1994, according to the New York State sex offender registry.

If Wendy won’t let go of the past, neither will Nicki. “I didn’t know that in our society, you have to be inaudible by your past. I didn’t know that people can’t turn over a new leaf. I didn’t know that your viciousness and evilness was this deep rooted,” Nicki continued to vent. She then claimed Wendy’s past marital problems were the source of the TV personality’s shade! “I understand now. When a woman isn’t really being loved at home, their viciousness is a different type. But I really wanted to pray for you today because look at where you are now in your life? Look at what age you are,” Nicki went on. “You sat up there being vicious all this time and you probably paid for that man’s mistress for all these years, child, you paid for her shopping sprees, hotels, b**tch you probably paid for her delivery, ho. How you doin?”

Nicki still wasn’t done. Ironically, the rapper once cheered on Wendy while the TV personality was living in a sober home for addiction earlier in 2019, making Wendy’s comments even more blindsiding. “I don’t want to imagine you without that wig on your head, and that’s why [Kevin] ran. I was one of those Black women supporting you when that came out. ‘Let’s surround her and uplift her.’ I was one of those people rooting for you at the sober living home because we are people first before we’re personas,” Nicki said on her radio show. She’s not feeling as sympathetic now, though.

“And I know you must have gone through a lot… but you are demonic and that’s why this stuff unfolded. If I were you, I would go and pray, ask for forgiveness, you can report the news, people do it all the time without the level of viciousness. I watched you do that to Beyoncé for years and I could never figure out why. It was sickening to watch,” Nicki said, nearing the end of her rant about Wendy.

Wendy not only mocked Nicki’s marriage, but the idea of the rapper becoming pregnant as well. “Can you imagine a burgeoning belly with these burgeoning hips? I mean, the plastic of it all. She’s gonna have a big belly and she’s short and she’s got the boobs and the hips,” Wendy quipped on the Oct. 23 episode of her talk show. The body-shaming comments were truly puzzling, considering that Wendy once voiced her approval of Nicki and Kenneth’s relationship in July 2019! Regardless of Wendy’s opinion about Nicki and Kenneth’s marriage, the newlyweds were still the image of marital bliss when they snuggled in the Queen Radio recording studio on Friday.