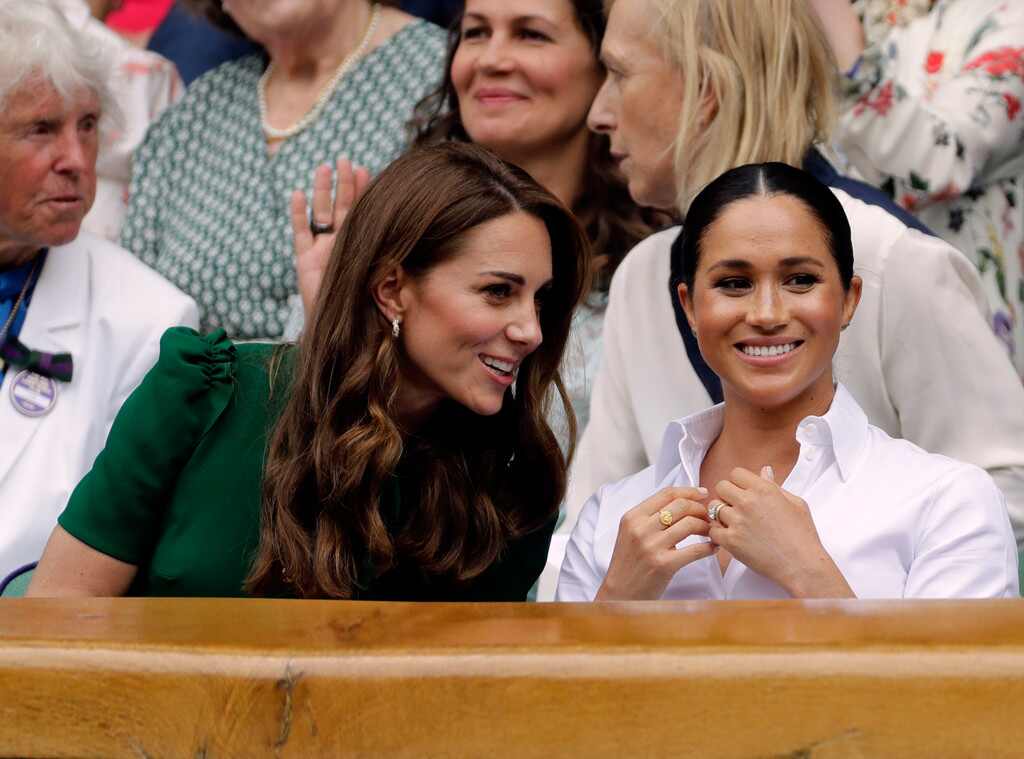 Generally, you expect those reports to be overblown. You at least hope they are. The ones about unraveling family ties, short-circuiting bonds and any other issue that’s supposedly evidence of a deepening rift among the young royals. For instance, the one last year about Meghan Markle and Kate Middleton having an “explosive row”—a “one-off” but, still, a row—supposedly over Meghan talking to members of Kate’s staff in a way that the future queen did not care for. Usually content to keep calm and carry on, Kensington Palace took the rare step of bothering to flatly deny that any such thing had taken place.

At the time, tensions were especially high in TabloidLandia, with not just Meghan and Kate having problems but Prince Harry and Prince William also increasingly at odds, much to the consternation of their father, Prince Charles, who as the immediate heir to the throne has an especial aversion to family squabbles.

But that was a whole year ago, and surely everything has been sorted out since.

The drama that ensued when Harry admitted in October that he and William haven’t always got along every day of their lives feels laughably insignificant when juxtaposed with Prince Andrew’s disastrous BBC Newsnight interview trying to explain away his past fraternization with sex offender Jeffrey Epstein, which resulted in the Firm basically firing the Duke of York last week. But William and Kate are still the future of the royal family—and Harry and Meghan’s public airing of their discontent still threw a wrench into the works of the ancient machine that both William and Charles, not to mention the queen, are trying to maintain.

Harry’s interview with ITV journalist Tom Bradby, in which he acknowledged that he and his older brother would always be there for each other but were on “different paths,” actually seemed to confirm the more benign analysis we’ve been hearing all year from royal experts—that moving out of Kensington Palace and setting up his own household and charitable foundation with Meghan was simply a matter of Harry wanting to do his own thing with his own family, like a normal person.

But that candor still caused a conundrum for his father and brother. Naturally they were worried to hear that dealing with the pressures that come with his life required “constant management” for Harry, emotionally speaking, and that the circumstances of Princess Diana’s death in 1997 remained “a wound that festers.”

Yet William and Charles were also “fairly astonished,” as well, that Harry and Meghan opened up about their struggles to Bradby to the extent that they did, royal sources said.

“There also seems to be a lot of bemusement within the royal family about what exactly Harry and Meghan are trying to achieve, as members of the royal family do not usually speak in such detail about personal matters,” one insider said.  “It’s fair to say that there is a deep sense of unease in the royal households about the direction this is all headed.”

The general response to the couple’s ITV special was overwhelmingly positive from those who saw Harry and Meghan as human beings setting an example for others; just not so much from those who expect unflagging stoicism from their royals. Some compared the interviews, which aired as part of the ITV documentary Harry & Meghan: An African Journey, to Princess Diana’s controversial sit-down in 1995 with Martin Bashir for the BBC’s Panorama.

Which, don’t get us civilians wrong, was amazing. To this day it’s one of the few wellsprings of firsthand insight we have into the late Princess of Wales’ life, from her earliest days as a royal starting when she was 20 years old to the implosion of her marriage to Charles. But her interview also scandalized the royal family and it’s been said that Diana came to regret doing it, if mainly for the possible effect on her children if not her ex-in-laws.

A palace source told the BBC after the ITV special aired that it appeared that Harry and Meghan were “in a fragile place,” and that William was more concerned for his brother’s well-being than mad about anything he said. Kate, who was always close to Harry, was said to be just as concerned, perhaps not having realized before just how bad a time the couple were having.

“Behind the scenes I’m told Kate is doing her best to bring everyone together and help Meghan,” royal expert Phil Dampier told London’s Daily Express. “None of them want to let the queen down so Kate is trying to patch things up in private. I’m told she has reached out to Meghan and spoken to her on the phone. Kate feels sorry for her and knows that Meghan is struggling.”

Meanwhile, since Kensington Palace swatted down the report of their argument a year ago, there hadn’t been any actual visible signs that Kate and Meghan weren’t getting along. Not this past year, nor at any time, for that matter. After a perfectly civil Christmas celebration at Sandringham last December (said to be especially civil under the watchful eye of Prince Charles), they weren’t spotted together again until March at a celebration in honor of Charles’ 70th birthday. But their families were together for Easter, they chatted jovially at the Trooping the Color in June and attended Wimbledon together in July. And, as expected, the Cambridges were present for the christening of Harry and Meghan’s son, Archie Harrison, in July as well.

However, at two Remembrance Day events earlier this month, the Duchess of Sussex and Duchess of Cambridge didn’t really interact, at least not in front of any cameras, prompting speculation that all was still not well in the House of Windsor. But minus a period of time this summer when it was said they were growing closer and bonding over motherhood (as opposed to feuding over it, apparently), Kate and Meghan’s relationship has always been characterized over the three years they’ve known each other as perfectly… fine.

They’ve never been as close as sisters, they didn’t grow up together, they met their princes at completely different stages of their lives. Perhaps the disappointment of them not being besties proved more of an emotional bump in the road for everyone to get over than was expected, but at the end of the day… they’re just family.

At the very least they will always have their highly irregular lots in life in common, but Meghan is fully aware that Kate is on a one-way road to Buckingham Palace, and she simply isn’t. And Meghan is more than OK with that, seeing as how difficult being the wife of the guy only sixth in line to the throne has been.

“What’s challenging is when they are pitted against each other,” a source told People recently. “That’s been challenging to both of them. Meghan has her life, Kate has hers.”

Sarah Ferguson, Duchess of York, recalled earlier this year in an essay for Hello! (which had spearheaded an anti-bullying campaign inspired by the dreadful vitriol so easily spewed on social media these days) the tragic way the press framed her and Diana as rivals decades ago, and Sarah implied without naming names that she saw shades of that in the overarching narrative about Kate and Meghan. Similar to when Americans talk about the importance of truth and honor and the comments are interpreted as slams against the president even though no one has said his name, so has the effusive praise lately lavished upon Kate for being such a down-to-earth, graceful multitasker as she juggles official duties with caring for three children and making it into the kitchen most nights to cook dinner come to signify a subtle slam against Meghan. As in, “Look at how this duchess calmly and coolly deals with everything!…Why can’t the other duchess be like that?”

Kate is no stranger to scrutiny, having been a part of William’s life for the better part of two decades and married to him for almost nine years. But in addition to now having had all that time to get used to the familial guidelines as dictated by the crown, as well as the feverish press coverage, after she was married the local media mostly stopped subjecting her to the endless dissection of her motives and true character that has followed Meghan throughout her first year of marriage and into her first year of motherhood.

“Catherine has told Meghan that every royal—including herself—goes through a bad patch with the press but the important thing is to learn by mistakes, move on and get through it,” Dampier told the Express.

But Meghan didn’t realize she had signed up for the brunt of the ridicule. “I never thought this would be easy, but I thought it would be fair,” Meghan told Bradby in October, “and that is the part that is hard to reconcile. But…just take each day as it comes.”

Further separating herself from Kate’s determination to grin and bear all (and the unwritten requirement that she do so), Meghan is not only fighting back against alleged intrusions into her life, filing suit against the Mail on Sunday for publishing a letter she wrote to her father, she’s also taking an unprecedented step back from the spotlight.

The Duke and Duchess of Sussex are planning to skip Queen Elizabeth II’s annual Christmas celebration at Sandringham—with the monarch’s permission but also to her reported disappointment—and go to the United States, part of the couple’s six-week break from public life.

Which, of course, doesn’t look great to those already rubbed the wrong way by the couple’s myriad laments.

“If Harry and Meghan wanted to heal the divisions they should have turned up at Sandringham,” Phil Dampier told the Mail Online. “It’s a great shame but there seems to be a problem which is getting worse, not better.”

It’s not unheard of—Kate and William have missed the queen’s Sandringham gathering twice since 2012—but the timing, for those keeping track for appearances’ sake, is certainly not ideal.