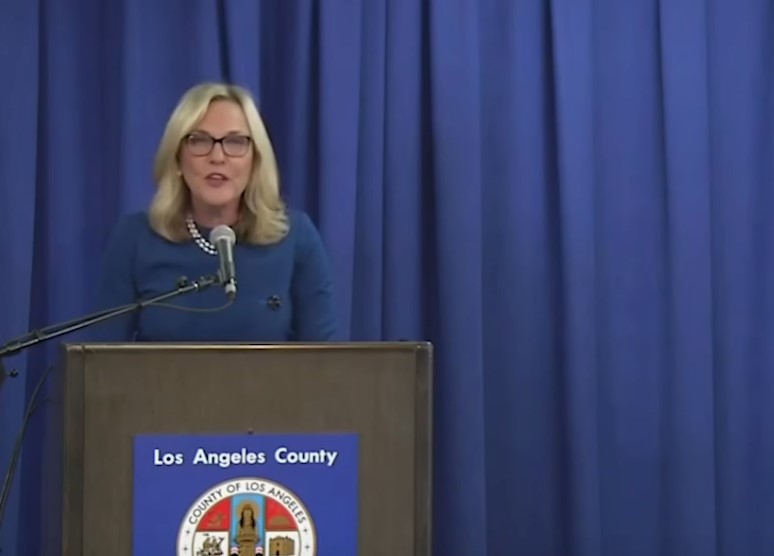 A man with an underlying medical condition became the second person to die of the coronavirus in Los Angeles County, officials announced Thursday, and the total number of confirmed cases rose by 40 overnight to 230.

The man who died was between 30 and 50 years old, county health officials said at a news conference.

Two of the new cases are in Long Beach, which now has 12 confirmed cases, the Long Beach Public Health Department said. Three people there have recovered from the virus and 130 people are being monitored, officials said.

Laboratory testing for the coronavirus is increasing but remains limited, Ferrer said. Seven labs are serving the county, and they have multiple sites where they are testing specimens, she said.

As she announced the new cases, Ferrer urged residents to get serious about limiting contact with others.

Many Californians isolated in their homes have watched as the number of confirmed cases continues to rise daily. As of Thursday evening, the state has at least 1,001 cases and 19 deaths, compared with 157 cases and three deaths the week before. About 12,000 people in the state are self-monitoring for symptoms.

Sacramento County has 45 confirmed cases of COVID-19 and has had three people die of complications from the virus that causes the disease.

San Francisco officials said Thursday that the city is adding 2,500 new shelter spaces for the homeless and 3,500 hotel rooms for people who need to quarantine but have no place to do so. Many of the hotel rooms will go to people who live in single-occupancy hotels with shared bathrooms and kitchens. The amount of new spaces and rooms is based on estimates from public health officials about what will be needed. Those numbers could increase.

San Francisco has about 8,000 homeless people. The city will open “pop up” shelters to ensure social distancing, and isolate homeless individuals who have tested positive but do not require hospitalization, officials said Thursday.

Trent Rhorer, executive director of San Francisco’s Department of Human Services, said the city expects to have leases for 500 rooms by the end of the week, and hotels with more than 2,000 rooms have expressed interest in leasing. He said the city was in the process of securing food and staffing for those in isolation.

In addition to the 3,500 rooms for isolation, the city will lease rooms for first responders.

“We don’t want healthcare workers on the front line to go home and potentially infect others,” he said.

Dr. Grant Colfax, San Francisco’s director of public health, said the city is trying to free up space in the hospitals for when the disease surges. He said residents may go out for fresh air with members of their households but should remain six feet away from others.

People who are 60 or older, have chronic health conditions or are sick should “stay home altogether,” he said.

He said the city has already hired an additional 70 new nurses and expects to hire “scores more” this weekend at a job fair.

“Today we have 70 confirmed cases,” he said, and that number will continue to rise.

In Riverside County, a vendor who performed work at a Rancho Mirage skilled nursing facility tested positive for the coronavirus, county health officials said Thursday. The woman in her 30s, who contracted with the Rancho Mirage Health and Rehabilitation Center, was in isolation at home and expected to recover.

A former resident of the facility had previously been diagnosed with the virus and died earlier in the week. The county Public Health Department tested 140 employees and vendors and 94 residents, and results are continuing to come in, officials said.

In addition to the woman, county reported five other new cases of the coronavirus for a total of 22. Thirteen are in the Coachella Valley, four are in western Riverside County and three are in the southwestern portion of the county, officials said.

Kern County announced its first three cases of the coronavirus in county residents Thursday. Public health officials were investigating how the people were exposed to the virus and tracking any contact with others they may have had, the county Public Health Services Department said in a news release.

Fresno County reported its third case of the virus Wednesday evening: a person who was recovering in isolation at home. Officials said they think the case is travel-related.

One of the new cases is a person between 18 and 24, and officials aren’t sure how that patient contracted the virus. The other, a person between 25 and 40, is believed to have caught it during travel, officials said. Both were tested at Kaweah Delta Medical Center.

Tulare County had reported two other new cases Wednesday night. One is a person between 18 and 25 who had traveled to Europe and self-quarantined after returning home, officials said. That patient was continuing to recover at home, and two contacts had been told to self-quarantine. The other case was a person over 65 believed to have contracted the virus through direct contact with another infected person, health officials said in a news release.

Newsom on Wednesday evening said the state has asked the Department of Defense to deploy the Navy’s Mercy hospital ship and two mobile hospitals to California to help care for the expected surge in hospitalizations of residents stricken by the coronavirus. He put the California National Guard on alert Tuesday.The governor said the state is working to expand available hospital beds by roughly 20,000, the number needed if more than half of Californians come down with the coronavirus. Newsom’s order falls short of activating California’s National Guard force of roughly 22,000, and he emphasized that the state often relies on the Guard’s assistance in times of disaster and crisis, especially in response to wildfires and earthquakes.

“That’s just one scenario plan. There’s others that are more modest. Some may, some cases may be more extreme,” Newsom said Wednesday evening during a Facebook Live broadcast. “When you’re looking at getting an additional [19,000] to 20,000 beds in your system, you have to look at your existing surge capacity within the healthcare delivery system, and you have to look at procuring additional assets.”

The state estimates that surge capacity in California’s existing hospital system could accommodate 10,000 patients. If requests for the military medical assistance are granted, California should be close to reaching the 20,000-bed threshold, Newsom said.

In the meantime, Newsom has ordered residents to stay in their homes to help stem the spread of the virus. Those who do venture out often find long lines and supermarket shelves stripped of cleaning supplies, toilet paper and other essential goods as shoppers continue panic buying across the state.

Newsom said the National Guard troops would, in part, “make sure food delivery is happening appropriately” and ensure that customers do not overreact at stores.

“We want to make sure people know that their security is top of mind,” he said during a Tuesday briefing on the state’s response to the outbreak.

Ronald Fong, president of the California Grocers Assn., said markets are struggling to restock shelves because so many customers are buying an overabundance of food and supplies.

He urged customers to return to their normal grocery shopping routine, saying there is no shortage of food or necessities such as toilet paper — just an overwhelmed supply chain to the stores.

“The grocery stores are what the governor has deemed an essential service,” Fong said. “Grocery stores are going to stay open. But we cannot keep up with a shopping pattern that customers have adopted by overbuying.”

Newsom said National Guard troops would also assist local governments, but he did not offer specifics about their potential roles.

“The reality is cities can only do so much, and when you are not capable of doing a little bit more, and it becomes regionalized, that’s the appropriate role of the state of California,” Newsom said. “We just want folks to know we’re leaning in a little bit more aggressively in that space as well.”

Gov. Pete Wilson deployed the Guard after the 1992 Los Angeles riots, when troops patrolled streets and enforced a nighttime curfew.

Earlier this month, a California National Guard helicopter delivered supplies to the Grand Princess cruise ship when it was held off the San Francisco coast until some of the passengers and crew could be tested for the coronavirus. The ship eventually docked in Oakland.

More than 20 states have already called in their National Guard troops in response to the coronavirus pandemic. Defense Secretary Mark Esper has said the department is considering activating National Guard units, the reserves and the Navy’s hospital ships to assist with stemming the outbreak.

Campuses are closed in response to the coronavirus pandemic, but school — and learning — is still in session.

“While we are in very unique circumstances at this time, we are still providing education to our students,” State Supt. of Public Instruction Tony Thurmond said. “School is not out, but we are finding a different way to deliver it.”

Nearly all schools across the state have shut down, and many districts have announced weeks-long closures. But Newsom on Tuesday evening said schools are likely to remain closed even longer — perhaps for the remainder of the academic year, a disruption to the education of 6.1 million students.

Newsom stuck to that position in a Wednesday update, although state and local school officials stressed that no official directive has been issued.

But the quick-moving developments have sent volunteers and educators scrambling to establish online coursework, meals and other support services for their many students in need.

At least 16 counties, most in the Bay Area, as well as the city of Palm Springs have ordered all residents to stay at home as much as possible.

“This is already a painful situation for many families and businesses. And make no mistake about it, it’s going to get worse before it gets better,” state Sen. Bill Dodd (D-Napa) said at a news conference. “But this is an opportunity to move in the right direction, to flatten the curve.”

In Ventura County, health officials announced a shelter-in-place order Tuesday that applies only to older residents.

In total, about 20% of the state’s population is under shelter-in-place orders.