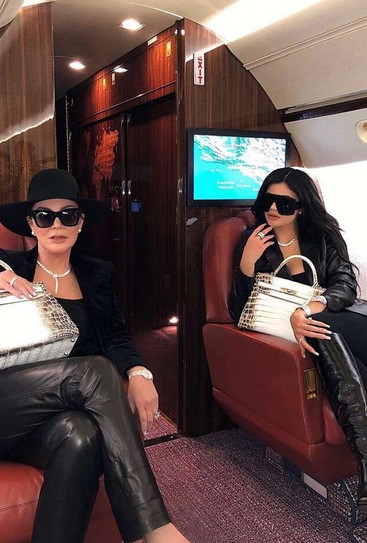 Kylie Jenner is back.

After experiencing a bit of a health scare last week, the Keeping Up With the Kardashians star proved she’s feeling much better by posting a picture of herself on Instagram. The snapshot showed the makeup mogul traveling in a private jet with her mom Kris Jenner. The famous family members were twinning in black ensembles and toted matching handbags. They also accessorized their looks with a touch of bling.

Last week, the Kylie Cosmetics head was hospitalized and had to miss the launch of her new collaboration with Balmain’s Olivier Rousteing. She shared the news on Instagram.

“Hi guys! So as you know, I was getting ready to go to Paris for the Balmain show at Paris Fashion Week for the launch of my makeup collab with Olivier,” she wrote at the time. “Unfortunately, I’m really sick and unable to travel. I’m heartbroken to be missing this show, but I know that my amazing team, and my friends who are in town for the event, will help me be there in spirit.”

Fans also noticed the reality star was M.I.A. at the 2019 Emmys. The celebrity was supposed to present an award with her sisters Kim Kardashian and Kendall Jenner; however, a source later confirmed to E! News Kylie had to miss out on the opportunity because she was under the weather.

However, it looks like Kylie is feeling much better. Over the weekend, she posted a few pictures of herself rocking a hot pink ensemble and admiring a few fall accessories. She also posted a selfie in which she bared her stomach.

“Ok my body is really pulling the f–k through these days,” she captioned the latter

In addition, she posted footage of her daughter, Stormi Webster, giving a few sweet smooches—the perfect remedy for this proud mama.

Now, time to return to running her beauty empire!