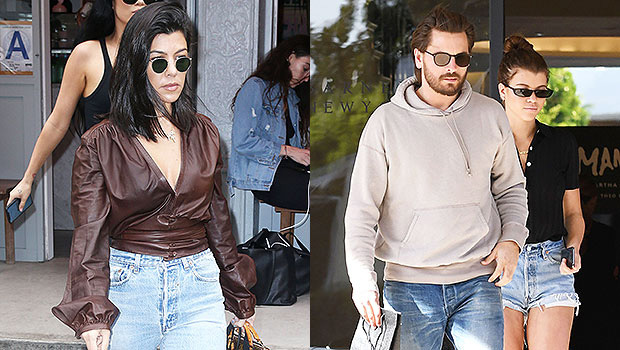 Party in the city where the heat is on! Scott Disick, 35, and Sofia Richie, 21, looked to be having a blast with one another as they spent Thanksgiving together in Miami on Nov. 28. The Flip it Like Disick star got an eyeful of his blonde bombshell girlfriend when he was spotted checking her out as she put her clothes back on while they were at the beach. Sofia dazzled everyone around her shortly before that when she was seen wearing nothing but a skimpy bikini! They later got dressed to impress at their pal Dave Grutman‘s home for a major holiday dinner. Sofia took to her Instagram Story to show off her Thanksgiving outfit, which consisted of light-wash jeans and a brown top. There were, however, noticeable people missing during their sunny getaway.

Scott did not spend Thanksgiving with his ex Kourtney Kardashian, 40, and their kids Mason, 9, Penelope, 7, and Reign, 4. The Poosh founder stayed quiet on social media and didn’t share any photos or Stories of what happened between she and her children that day. So was this a sign of her being frustrated about her former flame being away with his girlfriend on such a momentous occasion?

Not so much, apparently. “Kourtney and Scott discussed his plans well ahead of time and she knew he was going to Miami with Sofia to spend Thanksgiving there, and Kourtney completely supported his decision to celebrate there together,” a source tells HollywoodLife EXCLUSIVELY. “Kourtney knows that Scott is such a great father to their kids and spends so much of his time with them whenever he can.”

The source continued, “But she also knows that Scott has a relationship with Sofia and that it’s completely OK to take some time separate from her and the kids to spend with Sofia on their own.”

Scott’s love for his children is evident especially on social media. He posts just as many photos with his kids as he does with his girlfriend, including one of him chilling with his youngest Reign on a private jet.