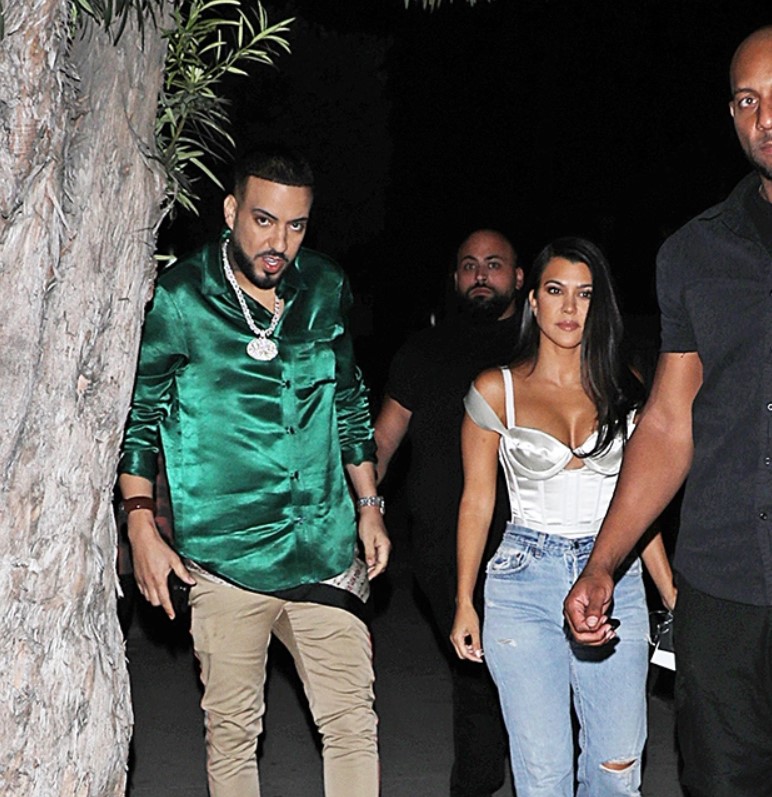 Khloe Kardashian and French Montana haven’t dated in years — but evidently, he’s still friends with Khloe’s older sister, Kourtney! Kourt and French were out and about on Friday, September 14 as they attended friend Stephanie Shepherd‘s birthday party. The festivities began at L.A. hotspot Genghis Cohen, where they arrived at 11 p.m. and then moved over to Hyde, the party continued until 2:30 a.m. Kourtney, 40, and French Montana, 34, appear to have kept a close relationship, as the rapper celebrated Muslim holiday Eid Mubarak with a feast at her Calabases home in June. The duo both shared photos and videos of the dinner on social media.

Kourtney was dressed for a night out, with a super sexy bustier top that pushed up her cleavage and showed off her gorgeous, toned arms. She paired the top with mid-rise, straight legged jeans with distressing and rips and finished the look with pointy caged pumps. Her hair was styled in a classic blowout, perfectly framing her face, as she rocked a nude glossy lip and smokey eye. French was looking equally as fashionable in a striking emerald green silk button down, classic skinny chinos, a fresh white sneaker and his go-to diamond chain.

Khloe and French — who was born Karim Kharbouch in Morocco — were in an on-again, off-again relationship after being introduced by mutual friend Diddy in July 2014 (French is also on Diddy’s Bad Boy label). The Keeping Up star appeared in French’s music video for “Don’t Panic” shortly after but the duo broke things off that September. They then rekindled the relationship that November before calling it quits again. Of note, French was Khloe’s first relationship after her split from husband of seven years Lamar Odom.

Though it has been several years since Khloe and the “Unforgettable” rapper were romantically involved, they are reportedly still close as Khloe was leaning on him for support during her split from Tristan Thompson. “They are more than just friends, French is someone that Khloe has always been able to trust and talk to about things,” a source spilled EXCLUSIVELY to HollywoodLife back in April. French has also defended their short relationship in the past, insisting he was not a rebound and the “love was real” to Haute Living magazine in June. “Me and Khloe are always going to be friends, and the family still remains close…I feel like we had a real dope relationship―there was no bad blood, nobody did something to somebody that we couldn’t come back from,” he added at the time.11

As for the birthday girl, Stephanie has been a close friend of Kourtney’s for some time, as the two bonded when she was Kim Kardashian‘s personal assistant and later Chief Operating Officer of the Kardashian West Brands. Kim fired Stephanie after Steph gave an interview to Refinery29 about working with the family, and Kim admitted she was bothered by Kourtney and Stephanie’s close relationship in an episode of KUWTK. While Stephanie may no longer be an employee of the KarJenner’s, her friendship with Kourtney is clearly unaffected by past drama!