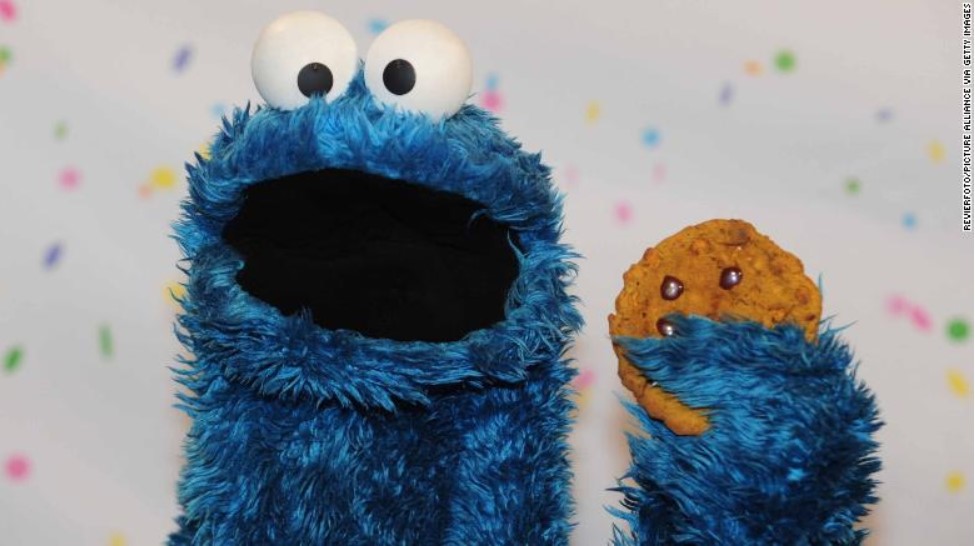 It’s Cookie Monster’s Birthday! Here are the most powerful lessons he’s taught us

Life, liberty and the pursuit of cookies — or maybe just that last part. It’s the tenet by which Cookie Monster has lived his puppet life for more than 50 years. The lovable cookie lover took up residence on “Sesame Street” in 1969, but he celebrates his birthday November 2. His age remains a mystery — is he a child frozen in time or an immortal monster-man? — but his appeal is timeless.

Known for his boundless imagination and unfettered zest for the sugary spherical treats, the resident sugar addict of “Sesame Street” has more to say than “ME WANT COOKIE!”

So, celebrate his special day with a mouthful of cookies (or vegetables as Cookie is into those now!). But while you’re at it, stew on some of the valuable lessons the googly eyed monster has imparted.

Treating yourself is OK!

Cookies — there’s never a wrong time for them. Disagree? Blame the blue monster.

He gobbles down cookies for breakfast, lunch and dinner, and impressionable audiences can only take that to mean one thing: Cookies are a delectable treat, one we all deserve to enjoy.

Chocolate chip, sugar, Oreo — Cookie Monster will eat them ALL. He’s been known to chow down on inedible objects, even, if he gets too excited. But his official cookie recipe, which ABC News unearthed in 1975’s “Big Bird’s Busy Book,” notably doesn’t feature chocolate on the ingredients list.

He riffed on classic musicals, like a “Guys and Dolls” homage in 1989 that flipped gender stereotypes in children’s toys (boys can play with dolls, girls can play with trucks — and that’s fine!).

His theatrical retellings were ahead of their time. A conversation about gendered toys? In the 1980s? Groundbreaking!

He even disclosed on his verified Twitter account that he sees a therapist. Sure, it was a play on a popular meme, but what other puppets do you know actively working to destigmatize mental illness?

But being silly is important, too

Remember that time he rocked a bedazzled bowtie in a disco bop about his lost cookie, which he coincidentally lost mid-boogie?

Or his dramatic turns as “Double Stuffed Sevens,” a James Bond-type agent, and “Jean Bon-Bon,” the hero in “Les Mousserables”? Are Muppets eligible for acting Emmys? If so, someone, anyone, please alert the National Academy of Television Arts & Sciences.

Cookie Monster is secure enough to let loose among friends who support him. His confidence rivals that of most humans, and we could all borrow a bit of his unabashed silliness.

Even though Sir Ian McKellen tried to teach Cookie the meaning of the word “resist” more than 40 years into the show’s run, the lovable monster just couldn’t hack it.

For many years, his consumption of cookies went unchecked, and even encouraged, by his fellow residents.

Co-stars Only One Cannoli, Darth Baker and Groda (that’s Grover wearing Yoda ears) teach Cookie some coping strategies to distract him from his urges to eat his crunchy cookie co-pilot. And by the end of the tale, it works!

… but healthy change is possible

Cookie’s path to a diverse diet certainly wasn’t a straight one. But more than 30 years into his run, in a creative move partially sparked by rising childhood obesity rates per Britannica, everyone’s favorite sugar-scarfing monster learned it’s never too late to adopt some healthy habits.

He said it best in his aptly titled “Healthy Foods” rap: “Nutrition — it really hip!”

Flanked by singing pears, broccoli and what can only be assumed to be whole grain bread, Cookie waxes poetic about the virtues of a varied diet rich in fruits, veggies and meat in addition to chocolate chips.

He even hosted a cooking segment, where celebrities joined him to whip up healthy snacks. Cookie and his fuzzy pink co-host Gonger have made fruit sushi with Jenny Slate, Halloween-friendly peanut butter apple slices with Zooey Deschanel and zucchini nachos with Ellie Kemper.

And that’s good enough for me.