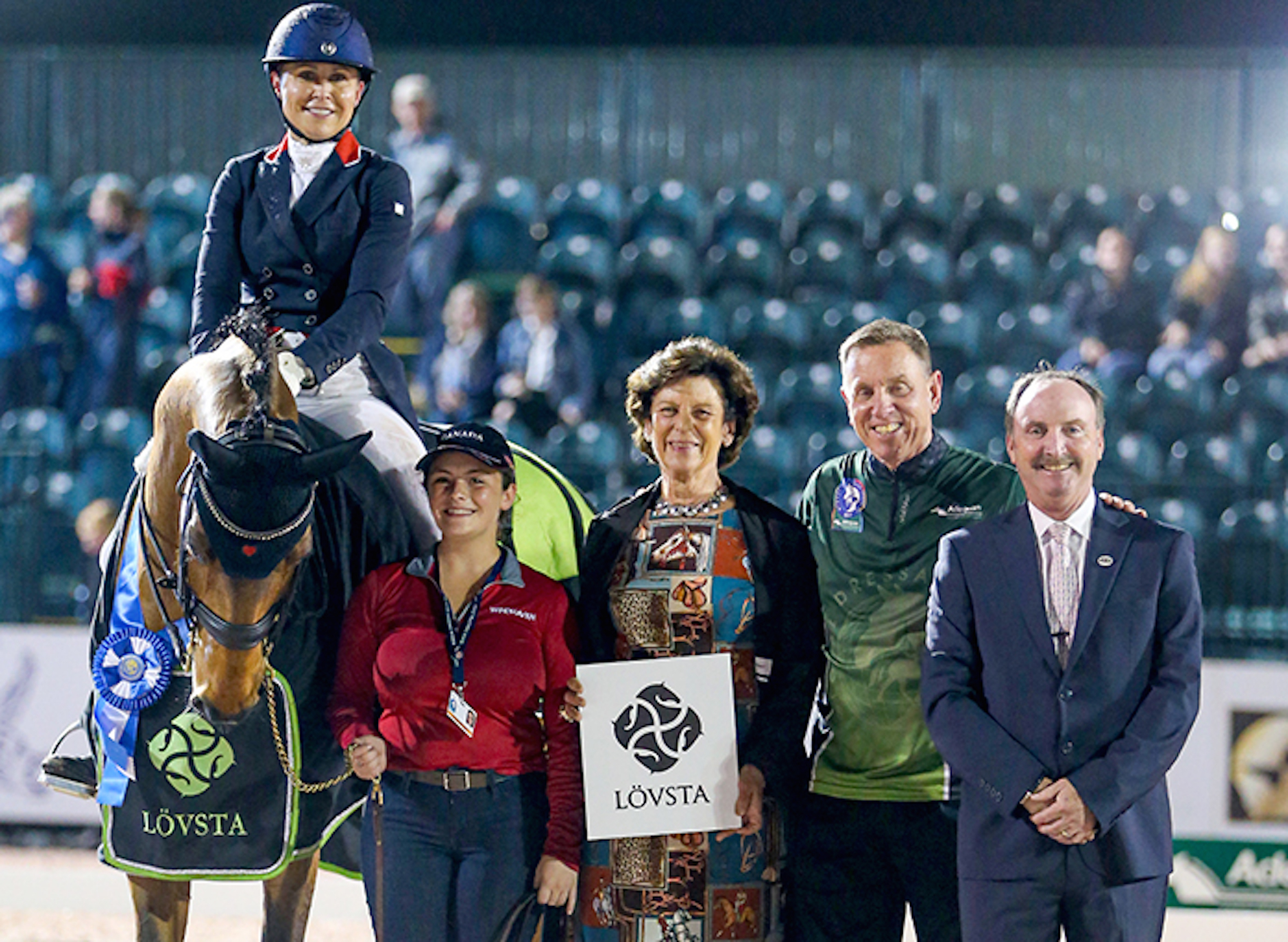 Irving and Degas 12 Shine in Wellington

Irving and her veteran 18-year-old gelding by De Niro impressed the five judges with their freestyle routine set to a montage of music from The Beatles, scoring 76.060 percent.

“His energy, his piaffe-passage felt great,” Irving said of Degas 12. “He’s just really flexible in everything. He’s not as nervous; that’s what age brings. His nerves have been challenging [in the past]. I was just thrilled with him.”

It was a Canadian sweep of the podium

The top three riders all train together…

It was a Canadian sweep of the podium, as Brittany Fraser-Beaulieu and All In came away with second-place honours with a score of 75.740 percent, while Naima Moreira-Laliberte rode Statesman to the third-place position in her debut under the lights. The pair’s score was 75.645 percent. The top three riders all train together in Wellington; Irving and Naima Moreira-Laliberte were also teammates on Canada’s gold medal-winning squad at the 2019 Pan American Games in Lima (PER).

Precision, balance, and musicality shone through in Irving’s freestyle test, as she and her partner competed to tunes from some of The Beatles’ most popular tunes, including Here Comes the Sun, Hard Day’s Night and All You Need is Love. The duo executed a line of one-tempi changes to Yellow Submarine, and at the final salute, Irving thrust her first into the air, indicating her delight at the performance.

“My niece is a singer/songwriter,” Irving explained. “We were on a trip, and she said, ‘Let me help you with your music.’ She thought [The Beatles] would be suitable for Degas. I had Joost [Peters] put it together for me.

“My horse was just really there for me and really into it [tonight],” she added.

Irving and Degas 12 also won the week’s Grand Prix CDI-W, which qualified them for the Freestyle competition. The duo has been partnered for the past 12 years.

“I got him when he was six, and he was pretty spicy!” Irving recalled. “We grew together. We’ve been really lucky. There’s a history.”

The stands were filled with dedicated fans, who cheered through several barrages of rain that passed through the area. The occasion marked the 2020 debut of the Global Dressage Festival’s “Friday Night Stars” series at the Palm Beach International Equestrian Center’s Stadium location. Three more World Cup qualifying legs will take place there throughout its 12-week winter circuit, on 24 January 2020; 7 February 2020; and 27 March 2020. These qualifiers will conclude the 2019/2020 North American League qualifying season, with the results determining the two athletes that will qualify for the FEI Dressage World Cup™ Final in Las Vegas (USA) in April.

North American League riders must receive three scores of at least 68 percent to be eligible for the Final. Their three best eligible scores from the season will be averaged to determine their final score. The top two riders will receive invitations to Las Vegas. The stakes are heightened this season, as riders are also looking to cement their places on their respective national teams for the Tokyo.

Irving and Degas 12’s score is the third-best recorded this season, behind only the 79.75 percent and 80.990 percent scores earned by Steffen Peters (USA) and Suppenkasper at Temecula (USA) and Del Mar (USA), respectively, at the start of the season.

“I was really nervous actually about [this] first show [since Lima], getting it out of the way” Irving said. “For the first time ever, I felt pressure for the country, pressure for the team, pressure for Tokyo. I haven’t made [my] plan, but I’m old fashioned. I listen to the horse a lot. I’ll start to make my plan now, I think, a bit more.”