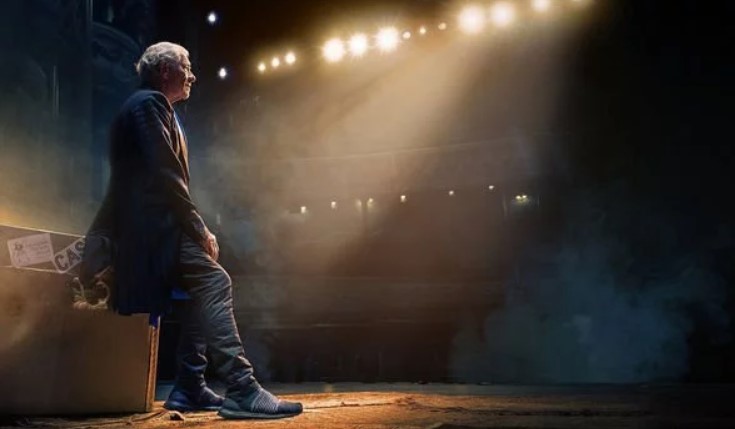 Ian McKellen On Stage review: From Gandalf to Gladys, a GLORIOUS delight – Do not miss

IAN MCKELLEN ON STAGE REVIEW: The actor thrilled friends and fans at the gala opening of his one-man show at the Harold Pinter Theatre in London. Icon. Inspiration. Gandalf. Richard III. Widow Twanky. Serena to his friends and beloved star to the hundreds of thousands of people who have packed out his tour so far. The joyous romp around the UK has taken in 86 theatres and played 175 shows. Most importantly, it has already raised £3million for the local theatres in each location. Now he’s settling in at the Harold Pinter until January 5. The opening night  kicked off with a brass band outside and ended with a big bucket. What happened in between was even more splendid.

Gladys, for those who don’t know, was Ian’s step-mother, after his father remarried in 1954 following the death of his mum Margery. Gladys lived to over a hundred and was the person Ian “loved most in the world.” Her inclusion in the show symbolises this heartfelt, hilarious and deeply moving potter through the life and career of one of our greatest actors. I wasn’t alone quietly sniffing as Ian recalled coming out to her age 47, struggling to say the words and then bathed with love when she replied: “I thought you were going to tell me something terrible. I’ve known for 35 years.”

The show is billed: “Ian McKellen on Stage with Tolkien, Shakespeare, others and you” and the audience participates throughout as Ian calls out questions, provokes hilarity and even gets one lucky fan up on stage. It all starts in darkness, a collective breath held – and then that glorious voice swoops out, the lights come up and the magic begins. It’s just a man on stage, albeit in fine form for eighty, holding a battered copy of Lord of the Rings, dressed in a loose black jacket and trousers, trainers, a blue scarf and two strands of blue beads. Oh yes, and that that voice. It rolls and positively rrrrumbles as he reads the passage from A Fellowship of The Ring where they flee through Moria and Gandalf faces the Balrog on the bridge. Somehow we are all there by his side, facing a demon made of fire.

It is spellbindingly extraordinary to experience. And if you are there next time and he asks if anyone wants to see the sword Glamdring up close, put your hand up quick – it might just lead to the best moment of your life. Glamdring and Gandalf’s hat are just the first things brought out of the giant trunk on stage which illustrate key moments from his life.

We revisit his childhood in Wigan and Bolton, his first visit to the theatre aged the to see Peter Pan. We share his wonder at the twinkling lights of Neverland. A decade later we also share his first erection sat in Row C of the balcony as he gazed in wonder at the handsome profile of matinee idol Ivor Novello. Our irrepressible host revels in naughty asides and anecdotes. He may be one of our finest classically trained actors but there is an unabashed touch of Musica Hall variety and bawdiness.

He constantly pays tribute to everyone who has helped and inspired him along the way including Welsh panto dame leged Wyn Colvin, whose first tip was “aways warm your bra on the radiator.” And then a headscarf comes out from the trunk and a shopping bag and we are off to the market with Widown Twanky. He throws sweets into the cheering crowd, unable to resist adding “It’s always good to have something to suck on” and then oranges and bananas before one poor chap is singled out who “who looks like needs the cucumber”.

There are joyous and affectionate impersonations of Sirs Lawrence Olivier and John Gielgud, a playful dig at best pal Patrick Stewart, the recreation of his interview for Cambridge University and a blissfully cheeky visit to Buckingham Palace, with Gladys and sister Jean, to collect his CBE. There is his passionate battle for gay rights and the relief when he finally came out and, at last “felt like a human being.”

And that’s only the first half.

Act 2 sees all 37 Shakespeare play brought out and the audience asked to call out their titles. Some prompt a monologue, others a delicious anecdote. About one, hilariously, our garrulous host frankly “has nothing say.” He recalls his powerful big-screen performance as Richard III and points out how extraordinary is the very first word of the play, “Now.” It sums up the unique place of theatre, always in the present. “Film,” he points out, “is already a flicker of the past.”

There is a beautiful tribute the those he has loved and admired and lost, personally and professionally. In fact, the whole night is a personal as it is professional, the sum of so many parts. It ends with Ian in his chair, Shakespeare plays piled high on the table, atop Lord of the rings and old schoolbooks, Gandalf’s hat atop the sword. Rather like Lord of the Rings, there are multiple endings, an ovation, a hilarious prank.

He reads in full Shakespeare’s passionate railing against bigotry and defence of immigrants, the ‘wretched strangers’, in the multiauthor play Sir Thomas More. 500 years later, we sadly acknowledge, and not so much has changed. Sir Ian McKellen is a champion of the theatre, of gay rights, of our humanity. He dashes off because he has somewhere more important to be. We file out and I hear a young woman say, “I feel like I have seen something important, something I’ll never forget.” And then, there he is again, at the exit, yellow bucket in hand collecting for ten theatre charities.

I feel like I have seen something special too.