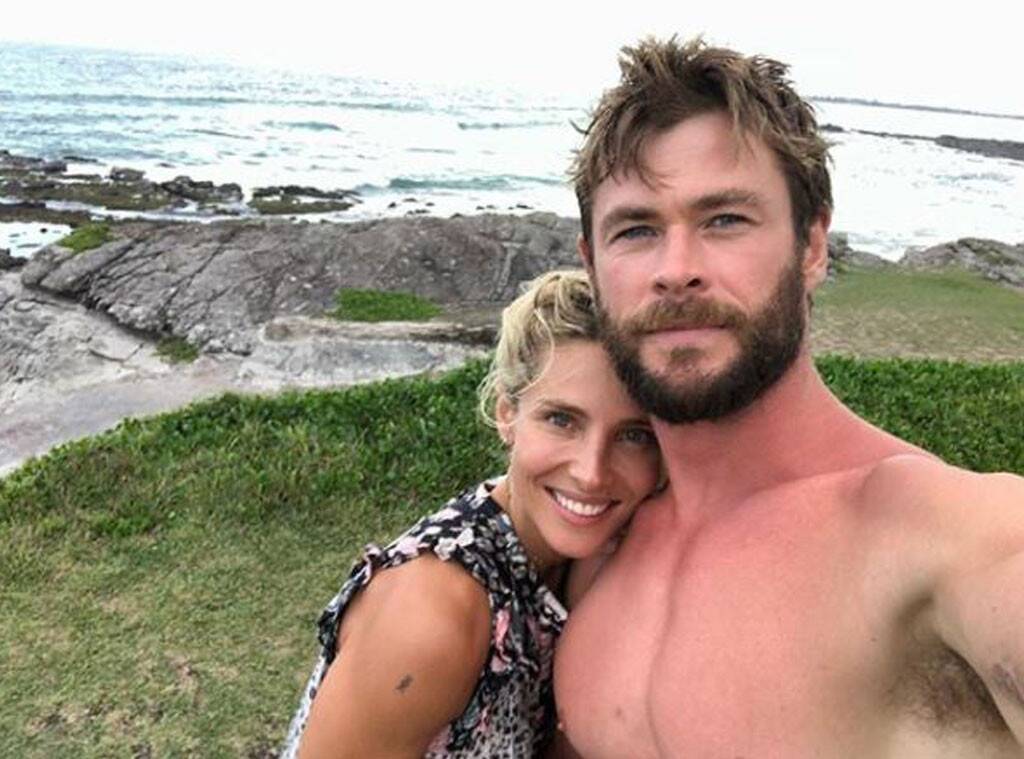 Sometimes it can be hard to argue that such a thing as fate doesn’t exist.  Consider the case of Elsa Pataky’s tattoos. There are dozens of them taking up residence on her 5-foot-3 frame, many of which are instantly understandable. There’s the “C” initial on the fourth finger of her left hand that husband Chris Hemsworth inked himself last year (she branded him with an “E” in the same spot) and symbols that represent her various family members on her forearm. And back in 2017 she and two friends (including Matt Damon’s wife Luciana Barroso) each got a set of three dots on their pinkies to solidify their bestie status.

But it’s the diminutive Thor symbol near her right shoulder that is perhaps the most interesting. The native of Madrid had it done when she was just 15 because she thought the marking looked interesting and she found the Norse god’s legend to be “so beautiful,” as she put it in Vogue Australia’s May 2018 issue.

There was really no way to know that some two decades later she’d find herself married to an Australian brawn of a man ready made to bring the hammer-wielding god to life on the big screen.  “Yes, it’s about Thor and I ended up marrying who plays Thor!” she admitted to the mag. “It is shocking how things in life [turn out].”

Certain situations are just meant to be. At least that’s how Pataky, some 13 years into a successful acting career in Spain, felt when talent agent William Ward introduced her to Hemsworth, whose cut 6-foot-3 frame and smoldering stare hadn’t yet manifested itself into a series of steady, lucrative gigs when they were brought together in 2010.

Somewhat recently out of a romance with Adrien Brody that included him wooing her with an actual castle, the now 42-year-old was taken with Hemsworth from their first conversation over the phone, his naturally deep register leaving her intrigued. And when she met him in person, well, even if he weren’t able to expound eloquently on such subjects as climate change and immigration, we get why she didn’t hesitate to marry him three months into their courtship.

Their wedding was so spur-of-the-moment that they maintain a friendly dispute to this day about the actual date, with Hemsworth only certain that it was sometime that December. Because at that point, the couple had already progressed to the meet the parents stage and were enjoying a Christmas getaway to Indonesia with their extended crews.

So “it just felt right,” to make their connection all legal like, the 35-year-old recalled on ITV’s Good Morning Britain in 2016. “There was no great plan to any of it to be honest, we were on holiday and we said, ‘Why don’t we get married, too?’ And then the next minute…There probably should have been some planning, but it all worked out. Honestly, we had both our families on holiday at the same time, just randomly, and we said, ‘This is a good opportunity with everyone together.’ So, we just did it.”

(We’re now starting to see where brother Liam Hemsworth and Miley Cyrus got the inspiration for their Christmastime vows.)

And much like his six-years younger brother and his bride, the OG Mr. and Mrs. Hemsworth have had some low moments over the course of their nearly decade-long love story. For as much as they were of the when you know, you know mindset—”From the first time we met, we just made sense. She’s fun. She’s outgoing, and she has a sense of humor and a passionate attitude toward life, which is nice to try to keep up with,” he noted to Elle in 2015—it’s tricky to move at a breakneck pace without suffering at least a little whiplash. It wasn’t all that long into their union that the couple learned they were expecting, welcoming their first child, daughter India, exactly seven years ago today. Her twin brothers Tristan and Sasha followed behind in March 2014.

“We did everything very quickly—I don’t know how we survived as a couple,” the actress admitted to Vogue. “We were married and then a year after we had kids. It puts a lot of pressure on a marriage, but we came out good because there is a lot of love between us and we are very strong personalities but love each other so much. We make it work.”

That’s not to say it wasn’t touch-and-go there for a moment. After scoring his big break with 2011’s Thor, Hemsworth booked the likes of The Cabin in the Woods, Snow White and the Huntsman and Red Dawn in quick succession. And the Avengers franchise being it’s own beast, he was plenty busy appearing in its various iterations.

“My wife and I fell in love, had kids, didn’t really see each other for a few years, then fell back in love,” he told GQ Australia in 2017 of making the most of his career heyday. “In terms of work, she’s certainly given up more than I have. She’d like me to step back and be at home with the kids more, and of course, I want that too. But I feel like I’m at this crucial point in my career—I’ve just got to set up for longevity or I’ll slip off.”  Having already put together quite the robust resume prior to their marriage, Pataky was okay taking on the role of background player.

“I wanted to focus on my children because I had already worked a lot, she recently explained in HOLA! USA’s March issue. “My husband was starting his career; it was his moment, and I wanted him to take advantage to work more. We decided if we had children, I wanted to stay with them and enjoy them to the fullest—but it was my decision. It can be managed perfectly, as we see women do nowadays.”