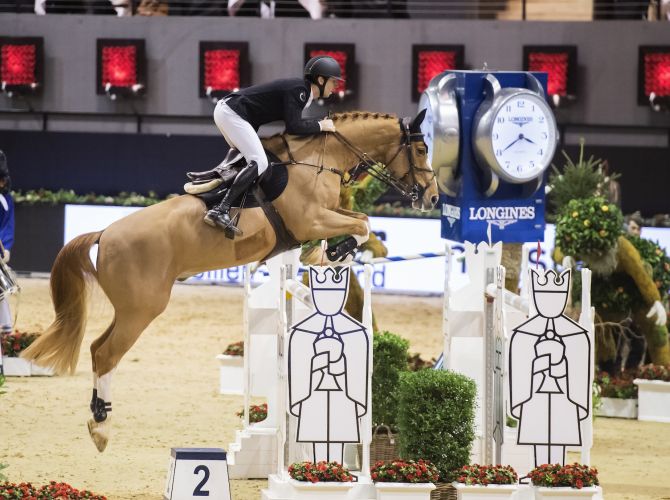 Defending champion Steve Guerdat of Switzerland took the top prize in Longines FEI Jumping World Cup™ action on Sunday in Basel, beating out a field of 14 other riders in a hotly contested jump off…

Guerdat and his 11-year-old Selle Français mount, Victorio des Frotards, laid down a blistering time to beat midway through the final round, showing why the Swiss rider is a former world number one, an Olympic champion, and a three-time World Cup champion.

Second place on Sunday went to Julien Epaillard of France and Queeletta, who came within fractions of a second of Guerdat’s time. The bronze medal was awarded to Pieter Devos of Belgium and his Dutch Warmblood Apart, who together won the Stuttgart leg earlier this season.

As fans filled the stands and VIP marquees, Western European League horse and rider teams assembled for Leg 10 of 14 to compete for qualifying points to head to the Longines FEI Jumping World Cup™ Finals in Las Vegas in April.

Twelve of the world’s top-20 Jumping athletes were present, including nine former world number ones and every winner of World Cup legs in the league so far this season. The course by Frank Rothenberger of Germany had a time limit of 71 seconds that caught out a handful of riders, as well as a tricky triple combination straight into a double combination and lots of left turns.

Whilst four riders elected to retire, amazingly 15 went clear to move on to a massive jump off.  First on the list, Longines Ambassador Jane Richard Philips of Switzerland and Olivier Robert of France both saw obstacles down for 4 penalty points, putting them out of the running. Mark McAuley of Ireland and Vivaldi du Theil had the first clear of the jump off, finishing in 33.52 seconds.

But their lead was short lived, as Hans-Dieter Dreher of Germany and Prinz crossed the beam in 33.30 seconds, moving them into first place. Janika Sprunger, the only other Swiss rider of nine to make it into the jump off, gave it a good go. But at 35.99 seconds, her ride with King Edward couldn’t top Dreher’s, even with no fences down.

The double was costly for veteran French rider Penelope Leprevost, leaving her on 4 points. However, countryman Kevin Staut, a former world number one, managed to go clear with Viking d’La Rousserie, tying McAuley’s time and leaving them both in second for the moment.

The crowd sat in excited anticipation as Steve Guerdat had his turn around the arena next. Finishing clear in only 31.44 seconds, he moved to the top of the leaderboard, with a tough gauntlet thrown down for the remaining riders. Try as they might, no one could beat Guerdat’s time, including Ireland’s Denis Lynch and Marcus Ehning of Germany, winner of the Madrid leg a few weeks ago, both of whom went clear.

Max Kühner of Austria also picked up 4 points on the double combination, opening the door for French rider Julien Epaillard, up next. Epaillard and Queeletta finished just a half second behind Guerdat in 31.94 seconds to move into second place.

Next in line, Scott Brash of Great Britain, who won the Verona leg in October, saw his ride unravel with a refusal at the Longines upright, racking up 11 penalties and a time of 50.69 seconds. Pieter Devos and Apart gave it their all. A clear ride in just 32.41 seconds put them in third with one rider to go. Would it be enough to make the podium?

Sadly for teammate Niels Bruynseels, it wasn’t his day, as he finished with 4 penalty points, leaving Guerdat, Epaillard, and Devos in the 1-2-3 positions. Rounding out the top 10 were Ehning in 4th and Lynch in 5th, followed by Dreher, Staut and McAuley, Sprunger, and Bruynseels, in that order. Sunday’s victory put Guerdat at the top of the league standings on 75 qualifying points, bumping Devos to second on 70 points. While the Swiss champion was thrilled to take the leg and lead the rankings, he said, “More important is to be on top at the end of the World Cup season! But I’m delighted with the horse. He’s giving it all for me. I’m really enjoying him, and he gives it back to me. It’s a fantastic feeling.”