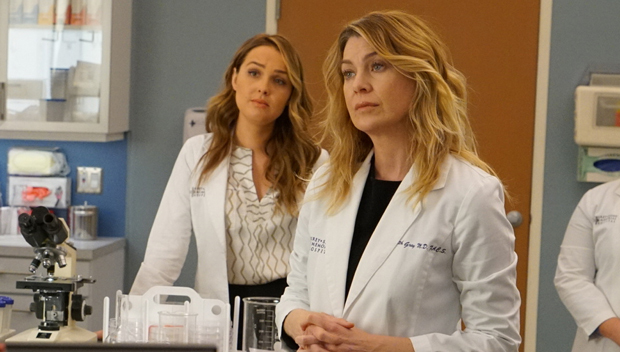 The May 2 episode of Grey’s Anatomy was titled “What I Did For Love”, so just about every character jumped leaps and bounds to show their significant other just how much they care about them. And for DeLuca, that meant telling Meredith that he loves her. The major admission came after Meredith committed insurance fraud to save a little girl, whose father was seeking asylum. Following the surgery, Meredith thought DeLuca was going to reprimand her for making such a foolish decision, but instead, he told her how in “awe” he was of her. “You got me all wrong,” he said. “I’m in awe of what you did today.” And the reason why he didn’t tell her sooner was because: “I was afraid that if I opened my mouth, the only thing that was gonna come out was… I love you.” But instead of saying it back, Meredith just said, “Oh. Glad we cleared that up” before exiting the room.

Meanwhile, Jo got a call that was meant for Alex, but because she took it, she was told that a hospital in Canada had another RH-null patient. And since she was so excited to hear that, she ran and told Gus’ mom and Alex, while also smiling for the first time since returning home from meeting her birth mother. Things were looking up for Jo! That is, until she learned that the patient in Canada needed blood. He wasn’t going to be donating to Gus. Instead, the Canadian hospital thought Gus could donate to their patient. Jo realized she “screwed up”, which is something she later relayed to Ben. And then she begged Teddy to help her in any way that she could. But Teddy couldn’t. However, Teddy and Ben both thought Jo’s behavior seemed off, so they reported her to Bailey, who then went to Alex to figure out how to handle the situation.

And speaking of Teddy — her due date is approaching, so Tom spent most of the episode helping her find a place to live. He was actually supposed to head to Baltimore for another job, but he called in a substitute because he doesn’t want to miss the birth of the baby. Sweet, right? Well, that’s not all. Tom took things a step further by actually renting out an apartment that he thought Teddy would love, and he presented her with keys at the end of the episode. Sadly, it doesn’t look like their love is going to last for very long, because Owen made some major progress this week during therapy. “I feel clear on what it is I want, and I don’t feel guilty that I’m gonna try to get it, and that’s some kind of a miracle,” he told his therapist, before adding, “I wanna feel perfectly clear when I tell her I love her.” He didn’t say who he meant by “her”, but our bets are on Teddy.