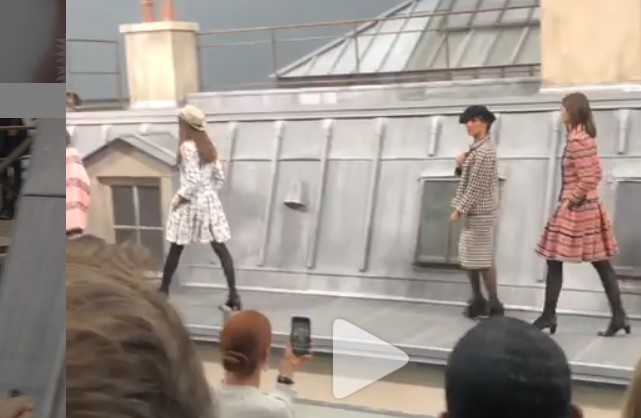 French comedian crashed Chanel’s Spring-Summer 2020 show at Paris Fashion Week, joining the parade of models walking the runway before she was confronted and escorted away by model Gigi Hadid.

Marie S’Infiltre, whose real name is Marie Benoliel, dodged security guards in the Grand Palais to climb onto the runway, which was designed to mimic the rooftops of Paris. A video posted on Instagram by Dazed Fashion showed Hadid approaching Benoliel and speaking to her before ushering Benoliel off the runway.

Speaking over Facebook Messenger, Benoliel declined to reveal how she gained access to the venue or what happened when she left the runway, saying, “Let’s say that the way it happened was probably not the smoothest, but I have known worse.”

“Gigi was quite nervous by all means and reacted quite aggressively to me. She clearly did not understand my comic approach,” she said. “I understand her reaction somewhat and continue to love her in spite of that.”

The comedian, whose stage name translates to “Marie inserts herself,” has almost 230,000 subscribers on YouTube. For one video, she attended a gilets jaunes protest wearing a mask of French president Emmanuel Macron; in another, she interviewed supporters of far-right former presidential candidate Marine Le Pen at a National Front rally, posing as a Le Pen supporter.

In 2017, she crashed the Cannes Film Festival red carpet, with the words “seeking role” and a phone number written on her back.

Her comedy is an “exhaustive satire about our society,” she said, citing Sacha Baron Cohen as her inspiration. “I am not making fun of people, I am pointing out how silly some people can be when they lack distance and thinking.”

The Chanel stunt is Benoliel’s second during Paris Fashion Week: Last week, she crashed the runway show of French lingerie brand Etam, wearing metallic underwear with a sleep mask on her head. She posted a video of the incident on her YouTube channel, showing her running onto the runway before joining the models for the show’s finale.

“I must say that the models and staffs were super friendly at Etam and it was a great moment,” Benoliel said.

She crashed the Chanel runway, she said, because “Chanel is eternal,” adding, “My tribute was a desire to take part in this eternity for a few minutes.”

“I understand that some people can feel angry because they have put up lots of work in these shows, but at the end of the day, I am not crashing anything! I am like a funny image in the background of a movie,” she said, adding that she had no intention of ruining the show.

“There is a French saying that goes ‘a day without a laugh is a day that is wasted.’ I am a strong supporter and believer in that,” Benoliel said.

In a statement sent to CNN, a spokesperson for Chanel said: “This person is a comedian known for this type of prank. She had crashed another runway recently. Her presence on the catwalk was not planned. Security guards simply led her to the exit at the end of the show.”