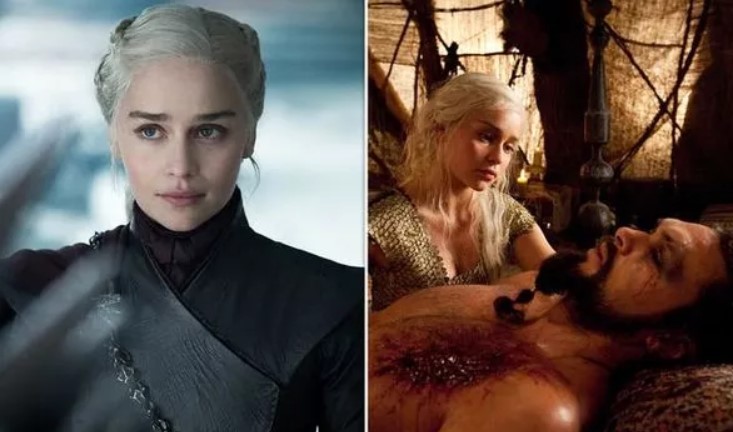 GAME OF THRONES season one saw Daenerys Targaryen tricked into sacrificing her unborn child in a cruel twist of fate, but did the Mother of Dragons know what she was in for all along?

Game of Thrones fans will remember the season one episodes that saw Daenerys Targaryen (Emilia Clarke) fall in love with Khal Drogo (Jason Momoa) and become pregnant with his child. The unborn foetus was under threat from the start with her brother Viserys (Harry Lloyd) threatening to cut out the unborn child with a sword after Drogo refused to acknowledge him as a king.

However, perhaps the most heartbreaking scene was when godswife Mirri Maz Duur (Mia Soteriou) tricked Daenerys into killing her unborn child in an evil spell. The fandom was clearly sympathetic to the Dragon, but one eagle-eyed fan thinks Daenerys wasn’t as innocent as viewers anticipated. Taking to Reddit, user Bahrain-fantasy said: “When Dany tells Mirri Maz Duur that she thought she meant the horse would pay for Drogo’s life. She responds ‘No, that was only a lie you told yourself. You knew the price.’

“Dany then doubts herself and in the same chapter ‘she could feel Rhaego receding from her, as if he had never been’. Which led me to believe that maybe Dany knew all along.

“What do you think? Did Dany know she was buying Drogo’s life with her son’s?”

The theory divided fans, with some claiming her innocence and others speculating she was in on the plan. Some users agreed she was in on the plan, an traded the life of her son for Khal Drogo’s. One user commented: “She knew because if I remember correctly at some point Jorah tries to bring her inside the tent because she doesn’t feel well and she doesn’t want too. The fan made reference to the line in the books, sharing a key quote: “What was wrong with them, couldn’t they see? Inside the tent the shapes were dancing, circling the brazier and the bloody bath, dark against the sandsilk, and some did not look human.”

However, another fan disagreed, claiming she was naive to what lay ahead: “Nah. Dany was a 14 year old girl whose life was collapsing all around her.

“She was just told that Drogo would die, the khalasar would fall apart and that the new Khals would give her son to the dogs when he was born, and that she would be dragged back to Vas Dothrak to serve out the rest of her days amongst the Dosh Khaleen.

“More than that, MMD was being deliberately vague on what the price actually was.

“Dany was just a scared girl who thought she had a way to prevent everything from falling apart so she latched onto it.

The theory comes after the script for the final episode of the series was released ahead of HBO nominating the writing of “The Iron Throne” for an Emmy. While the dialogue remains the same from what was aired, it has given fans a glimpse into what the writers were thinking when they penned it through the notes David Benioff and D.B. Weiss. One such annotation hints that Edmure was planning on using Bran as a puppet for self-gain when the youngster was in power. The line reads: “Edmure is still be miffed he wasn’t given serious consideration, but he expects he’ll have influence at court if his crippled nephew is ruling.”(sic) But with Bran’s seemingly all knowing powers, would he have cottoned on to his uncle’s desires?