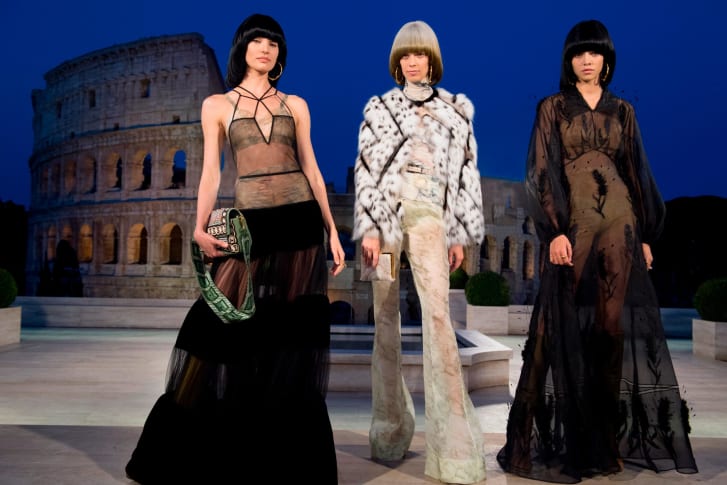 The Italian brand sent 54 new couture looks down the runway at the ancient Temple of Venus and Roma — one for each year the late designer worked at the fashion house.

The brand’s current creative director Silvia Venturini Fendi, the granddaughter of founders Adele and Edoardo Fendi, stepped out to an applause at the end of the show. Her Fall/Winter 2019-2020 collection, officially titled “The Dawn of Romanity,” was the first in the fashion house’s post-Lagerfeld era.

Venturini Fendi was a close friend and collaborator of Lagerfeld’s throughout his tenure. She joined the family business in 1994 and has spent most of her time working as the brand’s creative director of accessories and menswear. She’s credited for the iconic design of Fendi’s “Baguette” bag.

Anna Wintour, Susan Sarandon, Winnie Harlow and Catherine Zeta-Jones were among approximately 600 people in attendance. Guests were treated to a live performance by Italian composer Caterina Barbieri, as well as an open-air private dinner at the historic site. Rome’s famous Coliseum, just short distance away, served as a stunning backdrop for many of the evening’s photos.

Fendi’s CEO Serge Brunschwig took to the stage to honor Lagerfeld, who joined Fendi in 1965, saying he had spoken to the legendary designer before his death about hosting a show at the temple.

According to Brunschwig, the evening event was also intended to celebrate “the relationship between Fendi and Rome,” the city in which the luxury retailer launched in 1925. Fendi previously funded the restoration of Rome’s historic Trevi Fountain, where it held a spectacular 90th-anniversary show in 2016.

Lagerfeld, who died in February at the age of 85, was one of the most influential and outspoken figures in contemporary fashion. Last month, Fendi joined Chanel — where the designer also served as creative director — to stage a star-studded memorial. Their “Karl For Ever” tribute saw more than 1,000 guests celebrating Lagerfeld’s work and life at the Grand Palais in Paris.