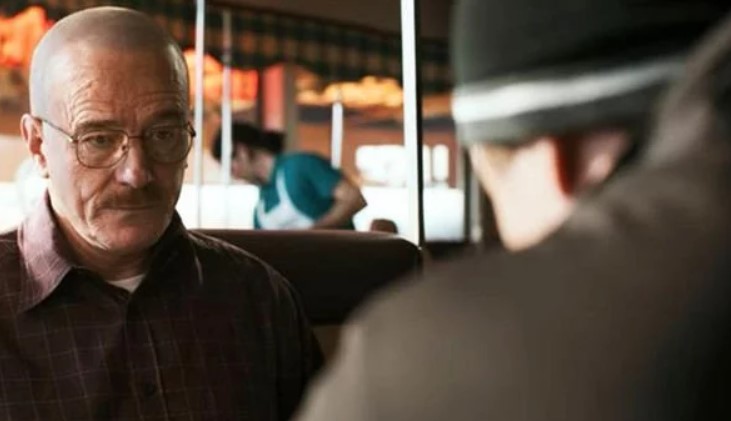 El Camino: Aaron Paul speaks out on THAT Breaking Bad cameo and how they kept it SECRET

WARNING: SPOILERS FOR EL CAMINO AHEAD. The Breaking Bad movie hit Netflix last Friday and was full of surprises. Thanks to flashbacks, Jesse was able to interact with characters who died in the show. But the best was saved right until near the end, as Bryan Cranston reprised the lead Walter White in El Camino. Speaking with Entertainment Weekly, Paul was asked about his scene in the diner between his Jesse and Cranston’s Walt – one set around the time of season 2, episode 9 Four Days Out.

Paul said: “That was very different to jump back into, but it was also incredibly easy to find that particular skin again.

“It was so nice to be able to play Jesse in his happier days.

“He was still very much in love with Jane. It was before heroin came into the mix. It was a simpler time

“Walt still had the looming death on the horizon — or so he thought — but it was so nice to be able to get in that wardrobe and sit opposite one of my nearest and dearest friends, my mentor, and play these roles again that completely changed our lives forever. It was really such a blessing.”

Paul was also asked how he managed to keep the Walt cameo a secret for El Camino.

Paul continued: “I have such funny videos of Brian and I walking in our sort of Star Wars cloaks, walking from our trailer to the SUV that takes us to set. It was pretty great.

“I also thought that maybe those clothes drew a lot more attention to us?

“But I don’t know. Obviously, it worked. I know they flew in Bryan on a private jet so he wouldn’t have to deal with the public at the airport.

“Obviously, we were never seen out in public together. I couldn’t go and hang out with Matt or Charles. I could only see them on set. But for me, that was the easiest part to keep it a secret. I mean, I love throwing surprises.

“I love surprising my wife. I love lying to people in an innocent way. And this was just that on a big scale.”

Asked if the extras in the Walt diner scene were crew, Paul added: “One hundred percent of those people were crew members or family of crew members.

“We needed that diner to be filled with people who we could trust to not leak this information. And also just to be a part of it, you know

“We wanted to be surrounded by loved ones, to be a part of this really cool day. The day Bryan came on set with that bald cap and those loafers and that classic Mr. White outfit.

“I mean, the faces that showed up, the people who flew in just to see this moment, they thought, ‘Well, look, if I’m going to visit one time, it’s gotta be during this time.’ It was pretty cool to be a part of that.”

El Camino is streaming on Netflix.