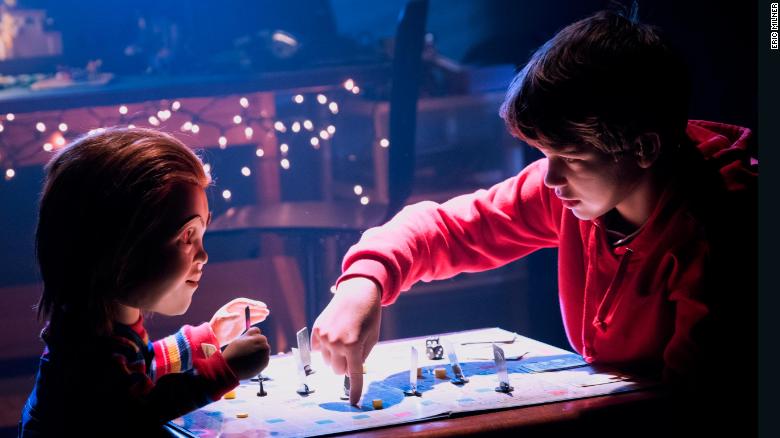 There’s another movie opening this weekend about a boy named Andy and his new toy, although nobody should confuse this one with Woody or Buzz. “Child’s Play” wasn’t crying out for a reboot, but a new version seeks to give the oft-sequel-ized killer doll a modern “Black Mirror” makeover, which is generally as unnecessary as that sounds.

The original Chucky — unleashed in 1988, before siring a half-dozen sequels — wasn’t exactly a model of creativity, planting a serial killer’s consciousness inside the big-eyed doll. The concept gets a “Westworld” twist here, although the reasons behind Chucky’s bad behavior are quickly if problematically explained near the outset, through the machinations of a disgruntled employee.

The underlying notion behind the Buddi doll seeks to leverage the increasingly nagging specter of technology running amok. Beyond an attempt to give the movie a fresh coat of paint, the idea provides Chucky with an expanded arsenal, inasmuch as he can tap into a network of devices from the company that made him.

Before all that can happen, there’s the little matter of setting things up, with single mom Karen (Aubrey Plaza) bringing home the slightly used doll as a gift to her son Andy (Gabriel Bateman), who’s having a tough time adjusting to their new digs.

“I will never leave you,” Chucky (voiced by Mark Hamill) assures the kid, after introducing himself as “your new best friend.” In other words, you’ve got a knife-wielding friend in him.

Not surprisingly, mom still pushes Andy to make flesh-and-blood friends, and he does, adding a couple of pals that, like everything else in the movie, have a derivative feel — in this case, adding a nerdy “Stranger Things” vibe.

The problem is that those pulling “Child’s Play’s” strings don’t consistently commit to anything other than the gore, which begins to spew forth as Chucky first tries to prove his loyalty, before eventually (and inevitably) putting Andy himself on the chopping block.

So while the movie initially features modestly clever wrinkles — and gets a lift from Brian Tyree Henry as a local cop, whose mom lives in their building — the satirical and technology-inspired elements recede as the conventional slasher bits take over. While that yields some what’s-behind-that-door thrills, there’s scarcely enough of them to flesh out the movie’s modest 88 minutes.

Mostly, the new “Child’s Play” amounts to counter-programming, from its release as an R-rated alternative to “Toy Story 4” to the promotional value in casting Hamill. He’s a skilled voice artist (there are echoes of his work as the Joker from the animated “Batman” series in Chucky’s angrier tones), and he clearly has fun with the mix of saccharine sayings and malevolent menace.

Still, that’s relatively small compensation, with a movie that — like many a nostalgic toy — begins to gradually lose interest almost as soon as it’s dusted off and taken out of the box.