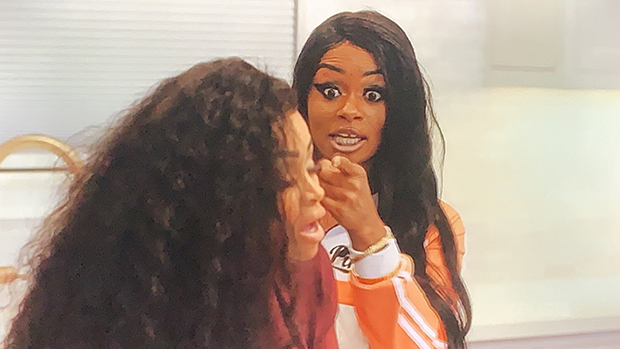 Blac Chyna invited her mom Tokyo Toni to hash out their issues on her new docu-series, The Real Blac Chyna, and things got heated QUICKLY. At first, the ladies almost had to stop filming altogether because they could barely be in the same room as each other, but eventually, they calmed down and agreed to talk. Tokyo screamed in Blac’s face, calling her “disgusting,” a “b****” and a “whore.” Blac was barely able to get a word in edgewise, but eventually told Tokyo that her issues stemmed from her mom “never being there.” This set Tokyo Toni off onto a whole new level.

“When!? When was I never there?!” she screamed in Chyna’s face. “Nobody took care of your a** but me. Not your motherf***ing grandmother. You can’t name one thing she bought your a** in life. Name it, I’ll wait! One thing! You lied on me. You lied on me!” The argument went back and forth like that for quite a bit, before Blac decided it was time to “boss up” and tell her mom how she really felt. However, it only resulted in Tokyo screaming in her face even more. “You put your hand in my face again, I’m going to stretch your a** across this motherf***ing kitchen,” she warned. “Keep your hand out of my face. Don’t touch me no more. You do it again…I’m gonna rock your world.”

Fans were absolutely outraged over Tokyo’s treatment of her daughter, but it’s what she said in her confessional that really got to them: “I don’t care what your mother did to you,” Tokyo explained. “I don’t care if she sold your p***y to an army…you still better respect your mama.” The fight only escalated from there, and even

“Blac Chyna is over 30 and her mom treats and talks to her her like this, imagine her childhood,” one person wrote. Someone else wrote, “So now that everyone sees who raised Blac Chyna, can we finally give Angela the respect she deserves?” A third person added, “I honestly feel SO bad for Blac Chyna…you can tell her mom was a f***ing psycho growing up.” And in reference to the “respect your mama” line, a fan ranted, “THAT’S the problem that a lot of our parents have. I don’t have to respect you if you neglect, demean or abuse me just because you’re my parent.”

Blac and Tokyo have had a lot of ups and downs over the years, but they recently revealed that they’re in a good place after filming The Real Blac Chyna together. However, after the episode aired, Tokyo revealed that she will not be returning for a second season. “Unfortunately I lost business due to the clippings that they put out,” she explained. The Real Blac Chyna airs on Zeus.